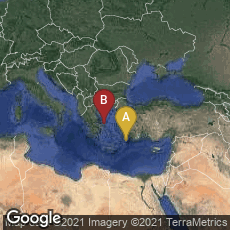 Nestor's Cup. Villa Arbusto museum in the village of Lacco Ameno on the island of Ischia, Italy.

The so-called Cup of Nestor from Pithikoussai, a clay drinking cup (kotyle) was found in 1954 at excavations in a grave in the ancient Greek site of Pithikoussai on the island of Ischia in the Tyrrhenian Sea, at the northern end of the Gulf of Naples. It bears a three-line inscription that was scratched on its side at a later time. This inscription, and the so-called Dipylon inscription from Athens, are the oldest known examples of writing in the Greek alphabet.

The inscription is fragmented, as some shards of the cup are lost. It is written in the early Euboean form of the Western Greek alphabet, written from right to left in three separate lines. The text runs:

This is usually transcribed (in later classical orthography, with the missing parts in brackets) as:

Nestor’s cup I am, good to drink from.
Whoever drinks this cup empty, straightaway
the desire of beautiful-crowned Aphrodite will seize.

Pithikoussai was one of the earliest Greek colonies in the West. The cup is dated to the Geometric Period (c.750-700 BCE) and is believed to have been originally manufactured in Rhodes. It is preserved in the Villa Arbusto museum in the village of Lacco Ameno on the island of Ischia, Italy.

Both the Cup of Nestor and the Dipylon inscription have been linked to early writing in the island of Euboea.

Meiggs & Lewis, A Selection of Greek Historical Inscriptions to the End of the Fifth Century B.C. (1969) No. 1.