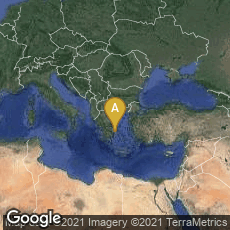 The Dipylon inscription, a short text written on an ancient Greek pottery vessel, is, along with the  Cup of Nestor from Pithikoussai, one of the two oldest known examples of the use of the Greek alphabet.

"The text is scratched on a wine jug (oenochoe), which was found in 1871 and is named after the location where it was found, the ancient Dipylon Cemetery, near the Dipylon Gate on the area of Kerameikos in Athens. The jug is attributed to the Late Geometrical Period (750-700 BCE), and it has been dated to ca. 740 BCE. It is now in the National Archaeological Museum of Athens (inv. 192)" (Wikipedia article on Diplyon inscription, accessed 04-25-2009).

Cup of Nestor from Pithikoussai: