15th century German blindstamped calf binding on the Bayerische Staatsbibliothek copy of Vocabularius. Note the attractive title label pasted to the upper cover. Most of these came loose or fell off over the centuries; this one in two colors, is unusually well preserved. 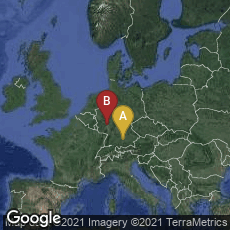 Handsome copy of Vocabularius, rubricated in red and blue from the Bayerische Staatsbibliothek.

In 1473 or 1474 printer Günther Zainer of Augsburg, Germany, issued Vocabularius, with text in both Latin and German. Vocabularius was the first technical dictionary, and after the Vocabularius ex quo (1467), the first bi-lingual dictionary, of which one copy, printed in Eltville, Germany, is recorded. Vocabularius was "devoted entirely to technical terms, each with its own section, of medicine (four sections), culinary and medicinal herbs and food plants, zoology, mining and mineralogy, navigation, architecture, textiles, tanning and leather work, musical instruments, books and book production, cooking and kitchen utensils, baking, wine and viticulture, gambling, carpentry, horses and carriages, etc.

"Some of the words are highly technical, lexicographical rarities. In the section on scribes and book production we find definitions not only of the traditional scribal tools (calamus, stilus, graphius, pugillaris, etc.), but also of such specialist words as antipira (= the scribe's eye-shade, for protection against the fire or candle-light), corrosorium (= the mill or grinder to reduce chalk to a powder for the preparation of vellum), and epicausterium (= the table-cloth on which the parchment is laid for ease of writing). None of these last words occurs, for example, in Karen Gould's "Terms for Book Production in a Fifteenth-Century Latin-English Nominale", The Papers of the Bibliographical Society of America, 79 (1985), pp. 75-99. There is also an entry on the distinction between the words liber, volumen, and codex; likewise between exemplar and exemplum.' (Nicholas Poole-Wilson). . . ." (W. P. Watson Antiquarian Books, online description, accessed 08-09-2009).

"Possessed of a knowledge of names rather than of things, the mediaeval student had one urgent need - a dictionary. New words began to pour in—in Arabic, Syriac, Hebrew, and Greek—whose meanings he sought to know; and, for the medical student, there were new drugs, the composition and uses of which were essential to his practice. It is not surprising then to find books of the dictionary class among the first to be printed. . . . The Vocabularius . . . has four sections devoted to medicine: (1) De homine et de diversis membris, in which the parts of the body are defined in order, with the German equivalents; brief references to authors are given. (2) De nominibus balneatorum etc., containing all the terms relating to bathing, bleeding, and cupping. (3) De medicis et eorum que pertinent ad medicine artes. The definitions here are most interesting... Siringa is described as a metallic instrument with which a surgeon injects resolving medicines into the Virile member in order to dissolve calculi in the bladder. (4) De nominibus quorundam egritudinum, contains seven and a half folios of definitions of diseases." (Osler, Incunabula medica).