Detail from a panel at Chauvet showing a pride of lions hunting bioson. (Click on image to view larger.) 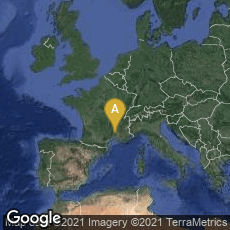 Fighting rhinos and horses. Detail from one of the most important panels of Chauvet.  It contains twenty animals including rhinoceroses and horses. (Click on image to view larger.)

Much of the earliest recorded information consists of paleolithic cave paintings and Cro-Magnon mobiliary art, including bones with talley marks. The purposes of this art may never be fully understood.

Until the dating of the "Panel of Hands" in the Cueva de El Castillo in Spain in 2012 the oldest cave paintings confirmed by radiocarbon dating were in the Chauvet Cave discovered in the Ardèche region of France in December 1994 by Jean-Marie Chauvet, Eliette Brunel Deschamps and Christian Hillaire. Paintings in the Chauvet Cave date as early as 30,000 BCE. In 1995 Chauvet, Deschamps and Hillaire published a splendid illustrated monograph on the cave: Grotte Chauvet à Vallon-Pont-d'Arc.  In 1996 this was translated into English as Dawn of Art: The Chauvet Cave. The Oldest Known Paintings in the World. Epilogue by Jean Clottes. Foreword by Paul. G. Bahn. The spectacular color images in this book showed most of the paintings, the bones found on the cave floor, and the hand prints done in red ochre.  Some of the paintings appear to show the animals in motion.

Almost immediately after the discovery of the Chauvet cave the French government sealed it with a bank vault style door, had the cave guarded, and allowed extremely limited access only by the most qualified scientists. In 2010 director Werner Herzog was able to obtain permission to film a documentary in the cave under very restricted conditions. This documentary he released in April 2011 under the title Cave of Forgotten Dreams. It was my pleasure to view this documentary in June 2011. The film also includes interviews with Nicolas Conard regarding the recent discovery of the earliest known mobiliary art in German caves. Notably, Herzog shot his documentary in 3-D, thus enabling the viewer to have a far more accurate sense of the depth of the cave, and of the shapes of the rocks on which the paintings were made, than would have been possible with conventional filming.

Because many cave paintings are deep inside caves, often in inaccessible locations, it is evident that they were painted in darkness lit by small oil lamps or torches.  It has been suggested that the paintings may not have been for public display, but might have been revealed to cognoscenti by elders of a tribal community.

dating of the "Panel of Hands" in the Cueva de El Castillo:

St. Benedict Founds the Abbey at Monte Cassino and Later Formulates his Rule
The Guild of Stationers is Founded. It is Eventually Granted a Monopoly
Edmund Berkeley Designs & Builds Simon, the First Personal Computer
The Library of Aristotle: Basis for the Royal Library of Alexandria?
The Codex Amiatinus: the Earliest Surviving Complete Bible in the Latin Vulgate, Containing One of the Earliest Surviving Images of Bookbindings and a Bookcase
The Contributions of the Emperor Charlemagne and the Educator Alcuin to the Carolingian Renaissance
Vikings Destroy the Library of York Cathedral
Pope Urban II's Sermon at the Council of Clermont Motivates Crusaders to Conquer Jerusalem and Form the Kingdom of Jerusalem
Private Libraries in the Muslim World are Destroyed or Plundered by Crusaders