Image Source: daten.digitale-sammlungen.de
Hartmann Schedel's ownership inscription written in red ink in his unmistakable elegant handwriting. His inscription is somewhat obscured by the large engraved bookplate of the Elector of Bavaria. Image Source: daten.digitale-sammlungen.de
Manuscript notes about the book on the flyleaf, probably written by Hartmann Schedel. 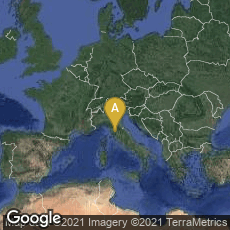 The First Printed Edition of Dioscorides In July 1478 printer Johannes de Medemblick published from Colle di Val d'Elsa, Italy, the Latin text of De materia medica by the Greek military physician, Pedanius Dioscorides, who served in the army of the emperor Nero, and practiced in Rome in the first century CE.

A work of great practical medicinal value, Dioscorides's work remained in circulation throughout the Middle Ages, in Latin, Greek, and Arabic versions, and was often supplemented with commentary and additions from Arabic and Indian sources. The text of the herbal which Medemblick published in print was a medieval Latin translation, reworked into alphabetical order, with commentary by the thirteenth century professor of medicine at Padua, Pietro d' Abano.

Dioscorides's text underwent numerous printed editions— many illustrated, and with commentaries, through the sixteenth century.