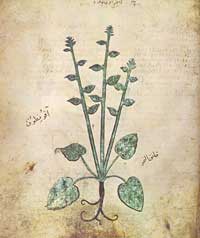 The manuscript was produced for the Byzantine princess Anicia Juliana, the daughter of Flavius Anicius Olybrius, who had been emperor of the western empire in 472 CE. "The frontispiece of the manuscript, the first donor portrait in the history of manuscript illumination, features her depiction, flanked by the personifications of Magnanimity and Prudence, with an allegory of the "Gratitude of the Arts" prostrate in front of her. The encircling inscription proclaims Juliana as a great patron of art" (Wikipedia article on Anicia Juliana, accessed 11-22-2008).

For this and other commissions Juliana may be considered the first non-reigning patron of the arts in recorded history.

"Splendid though the figures in the Codex Vindobonensis are, they reveal a naturalism so alien to contemporary Byzantine art that it is obvious that they were not drawn from nature but derived from originals of a much earlier date—as early, at least, as the second century AD. They vary, however, very much in quality and are clearly not all by the same hand, possibly not even all after the work of a single artist. In the text accompaying eleven of them there is association with the writings of Krateuas. All these figures are admirable, and clearly by the same hand; it must therefore seem certain that they, at all events, are derived from drawings by Krateuas himself" (Blunt & Raphael, The Illustrated Herbal [1979] 17).

The story of the manuscript's survival is relatively well documented:

"Presented in appreciation for her patronage in the construction of a district church in Constantinople, the parchment codex comprises 491 folios (or almost a thousand pages) and almost four hundred color illustrations, each occupying a full page facing a description of the plant's pharmacological properties. . . .

"In the Anicia codex, the chapter entries of De Materia Medica have been rearranged, the plants alphabetized and their descriptions augmented with observations from Galen and Crateuas (Krateuas), whose own herbal probably had been illustrated. Five supplemental texts also were appended, including paraphrases of the Theriaca and Alexipharmaca of Nicander and the Ornithiaca of Dionysius of Philadelphia (first century AD), which describes more than forty Mediterranean birds, including one sea bird shown with its wings both folded and open" (http://penelope.uchicago.edu/~grout/encyclopaedia_romana/aconite/materiamedica.html, accessed 11-22-2008)

From the time of its creation "Nearly nine centuries were to pass before we have further knowledge of the whereabouts of the codex. Then we learn that in 1406 it was being rebound by a certain John Chortasmenos for Nathanael, a monk and physician in the Prodromos Monastery in Constantinople, where seveteen years later it was seen by a Sicilian traveler named Aurispa. After the Muslim conquest of the city in 1453 the codex fell into the hands of the Turks, and Turkish and Arabic names were then added to the Greek. A century later it was in the possession of a Jew named Hamon, body physician to Suleiman the Magnificent, and it was presumably either by Hamon or by his son, who inherited it, that Hebrew names were also added" (Blunt & Raphael, op. cit., 15).

"Ogier Ghiselin de Busbecq, ambassador of Holy Roman Emperor Ferdinand I to the Ottoman court of Süleyman, attempted to purchase the Anicia codex in 1562 but could not afford the asking price. As he relates at the end of his Turkish Letters (IV, p.243),

"One treasure I left behind in Constantinople, a manuscript of Dioscorides, extremely ancient and written in majuscules, with drawings of the plants and containing also, if I am not mistaken, some fragments of Crateuas and a small treatise on birds. It belongs to a Jew, the son of Hamon, who, while he was still alive, was physician to Soleiman. I should like to have bought it, but the price frightened me; for a hundred ducats was named, a sum which would suit the Emperor's purse better than mine. I shall not cease to urge the Emperor to ransom so noble an author from such slavery. The manuscript, owing to its age, is in a bad state, being externally so worm-eaten that scarcely any one, if he saw if lying in the road, would bother to pick it up.

"In 1569 Emperor Maximilian II did acquire the Anicia codex for the imperial library in Vienna, now the Austrian National Library (Österreichische Nationalbibliothek), where it is designated Codex Vindobonensis Med. Gr. 1. (from Vindobona, the Latin name for Vienna) or, more simply, the Vienna Dioscorides." (http://penelope.uchicago.edu/~grout/encyclopaedia_romana/aconite/materiamedica.html, accessed 11-22-2008)