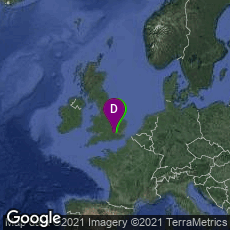 The murder John Tawell at his trial, after he was apprehended by the police who were warned by telegraph of his arrival on the train.

The first commercial electrical telegraph, based on technology originally invented by Francis Ronalds, was co-developed by Sir William Fothergill Cooke and Charles Wheatstone, and patented in May 1837 as an alarm system.  The Cooke-Wheatstone telegraph was first successfully demonstrated on July 25, 1837 between Euston and Camden Town in London. It entered commercial use on the Great Western Railway over the 13 miles (21 km) from Paddington station to West Drayton on April 9, 1839. On January 1, 1845 criminal John Tawell was apprehended following the use of a needle telegraph message from Slough to Paddington. "This is thought to be the first use of the telegraph to catch a murderer. The message was:

"The Cooke-Wheatstone system did not support punctuation, lower case, or the letters J, Q, and Z; hence the misspelling of 'just' and 'Quaker'. "Second class compartment" should also probably read "second first-class carriage"; this information was not significant, however, as Tawell was not arrested at the station, but at a nearby coffee shop" (Wikipedia article on Electrical Telegraph, accessed 12-22-2011).