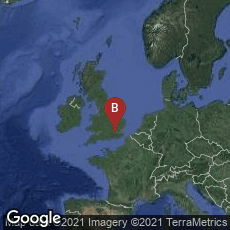 Ronalds' experiment with eight miles of iron wire from his Descriptions of an Electrical Telegraph, London: R. Hunter, 1823.

In 1816 English meteorologist and inventor Francis Ronalds built the first working electrostatic telegraph. This was the first "electric" medium for communication. Ronalds's device involved two synchronized clocks whose dials were marked with the letters of the alphabet. Instead of hands, each clock had a rotating disk with a notch cut into it so that only one letter on the clock face was visible at a time. Ronalds placed one clock at each end of eight miles of wire insulated by glass tubing that he had laid down in an elaborate series of back & forth coils in his garden in Hammersmith, London, and used electrical impulses to transmit signals between them. He wrote to Viscount Melville, First Lord of the British Admiralty, offering to demonstrate his telegraph, describing his invention as "a mode of conveying telegraphic intelligence with great rapidity, accuracy, and certainty, in all states of the atmosphere, either at night or in the day, and at small expense." However John Barrow, secretary to the admiralty, wrote back to Ronalds saying that "telegraphs of any kind are now [after the conclusion of the Napoleonic wars] totally unnecessary, and that no other than the one now in use [a semaphore telegraph] will be adopted" (quoted in DNB). Ronalds never patented his work. Eventually Charles Wheatstone and William Fothergill Cooke patented and popularized Ronalds's system.

Ronalds first published an account of his invention in Descriptions of an Electrical Telegraph, and of some other Electrical Apparatus (London, 1823).