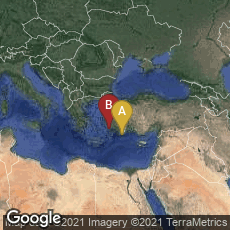 A: Turkey, B: Muğla, Turkey Model of the Uluburun ship.

The Uluburun shipwreck, a Late Bronze Age shipwreck discovered off Uluburun (Grand Cape) about 6 miles southeast of Kas in south-western Turkey, contained one of the most extensive surviving cargos excavated from the Mediterranean sea. As a result of 22,413 dives from 1984 to 1994 a multitude of items of raw material used in trade were excavated. Prior to the discovery of this shipwreck most of these items had been known primarily from ancient texts or Egyptian tomb paintings. The cargo matches many of the royal gifts listed in the Amarna letters.

The cargo, preserved in the Bodrum Museum of Underwater Archaeology in Bodrum Castle, Bodrum, Turkey, included the following:

Raw copper cargo totaling ten tons, consisting of a total of 354 ingots of the oxhide (rectangular with handholds extending from each corner) type. Out of the total amount of ingots at least 31 unique two-handled ingots were identified that were most likely shaped this way to assist the process of loading ingots onto specially designed saddles or harnesses for ease of transport over long distances by pack animals. 121 copper bun and oval ingots. The oxhide ingots were originally stowed in 4 distinct rows across the ship’s hold, which either slipped down the slope after the ship sank or shifted as the hull settled under the weight of the cargo. Approximately one ton of tin (when alloyed with the copper would make about 11 tons of bronze). Tin ingots were oxhide and bun shaped.

At least 149 Canaanite jars (widely found in Greece, Cyprus, Syria-Palestine, and Egypt). Jars are categorized as the northern type and were most likely made somewhere in the northern part of modern-day Israel. One jar filled with glass beads, many filled with olives, but the majority contained a substance known as Pistacia (terebinth) resin. Recent clay fabric analyses of Canaanite jar sherds from the 18th-Dynasty site of Tell el-Amarna have produced a specific clay fabric designation, and it is seemingly the same as that from the Uluburun shipwreck, of a type that is exclusively associated in Amarna with transporting Pistacia resin.

The Armarna Letters, an Archive of Egyptian Diplomatic Correspondence Written in the Diplomatic Language, Akkadian Cuneiform
The Origins of Glassmaking in Egypt