The verso of the title page of Binns' book credits the Young & Delcambre machine.

The hand-painted lithographed frontispiece for Binns' book is possibly unique for a medical book of the period. The keyboard and part of the mechanism is visible in this patent drawing. Watercolor portrait of Edward Binns by A. Taylor, 1838. From the Wellcome Library. 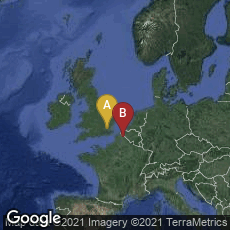 The first book typeset by the Young & Delcambre typesetting machine. One of the copies shown is inscribed by the author.

More than a decade after William Church's initial invention of a mechanical typesetting machine (1822), beginning in the 1840s, inventors developed and patented mechanical typesetting systems, which were basically improvements over the system that Church had initially conceptualized. As difficult as the process was to mechanize, we must assume that there was a perceived demand for mechanized typesetting because of the number of inventors who took up the challenge. Various of these early mechanical systems of type composition were employed in niche markets, such as newspapers and magazines, for certain periods of time. However, the Young & Delcambre "Pianotyp" patented in 1840 is the first machine for which at least some of the machine’s actual work is documented within the publications it produced. The Pianotyp, especially as developed by Adrien and his son Isidore Delcambre in France, was adopted by several printers and publishers between the 1840s and the 1860s. Several books typeset by this machine in France are known and others are being identified.

James Hadden Young and Adrien Delcambre, both of whom were residents of Lille, France, received British patent no. 8428 for "An Improved Mode of Setting up Printing Types" in 1840. Young and Delcambre's machine, as improved and made functional by engineer Henry Bessemer, was the first typesetting machine known to have been used in a printing office. However, their machine was not a great improvement conceptually over William Church's invention of 1822. The machine set a single continuous line of type; line breaking and justification were later done by hand.

"Type was held in long, narrow boxes from which it was released by a keyboard so that it slid down an inclined channel to a point where it was assembled into a line. The problem of making the type arrive in the right order, although solved by Church, had to be solved over again by Bessemer. He curved the channels to make them of equal length. . . " (Printing and the Mind of Man. Catalogue of the Exhibitions at the British Museum and at Earls Court, London 16-27 July 1963 [1963] No. 463.)

The first book typeset on the Young & Delcambre machine was English physician Edward Binns' The Anatomy of Sleep; or, the Art of Procuring Sound and Refreshing Slumber at Will published in London by John Churchill. This semi-popular work, printed in an edition of 500 copies in 1842, and with an unusual hand-colored and gilt engraved title page, was one of the first scientific studies of sleep. The verso of the title page indicated that the book was "Printed by J. Z. Young By the New Patent Composing Machine, 110 Chancery Lane."  Because the edition was only 500 copies it is likely that the book was printed on a hand press rather than one of the higher speed rotary presses, or printing machines, that were available for larger editions.

In his preface Binns aluded to the innovative methods employed in typesetting his book:

"It would be unjust to the ingenious inventors of the Machine by which this work has been composed, not say, that we believe it must and will, at no very distant period, supersede in many departments of typography composition in the usual mode. But the use of compositors can never be entirely dispensed with, even supposing the machine to be ten times more perfect that it is. The opposition with which its inventors have had to contend, is what might have been anticipated, but was certainly unexpected by the author. But that in time it will come generally into use, he thinks there cannot be a shadow of doubt. He consequently looks upon the publication of the "Anatomy of Sleep" as an epoch in the history of typography, from which it is possible to conceive a new era in the history of literature may be dated" (pp. ix-x).

Binns's book was extensively reviewed in English periodicals beginning in October and November of 1842. The manner in which it was produced did not escape the notice of reviewers as in a very long review in The Monthly Review 3, No. 3 (November 1842) the review began on p. 275:

"The first thing we shall notice about this beautifully-got-up volume is that it has been been typographically composed by machinery,— by means of an apparatus somewhat after the construction of a piano-forte, which touched, it may be by female fingers, drops the letters into their proper places; dispensing with the usual number, and certain of the usual operations, of regular compositors. This, however, is not the only wonder, nor the greatest mystery connected with the book; for it deals in wonders and treats on subjects that have hitherto baffled the investigations of man, and which there are grounds for believing will for ever transcend the physiological discoveries of mortals. What is sleep? In what condition is the mind of every person during a considerable portion of every four-and-twenty hours of his ordinary existence?. . . ."

Soon after publication of Binns's book, George Biggs applied the Young & Delcambre technology in the publication of the Family Herald or Useful Information and Amusement for the Million, the first issue of which appeared in London on on December 17, 1842. Owned and edited by James Elishama Smith, an image of the Young & Delcambre machine appeared in the title-piece of the journal. However, the use of the Young and Delcambre machine was opposed by the London Union of Compositors, particularly because women were employed to operate the machine, and the journal ceased publication in this form after 22 issues.  Young & Delcambre machine was also used in 1841 for typesetting another weekly, the London Phalanx, where was reviewed with great and seemingly naive enthusiasm on pp. 351 in the August 28 issue, and on pp. 567- 568 of the December 4 issue. On p. 568 the editors indicate that the magazine would be set by the Pianotyp from the 28th number (December 18) "onward." On p. 912, the last page of the April 30, 1842 issue, there is a small notice for Binns' book indicating that it could be purchased from the Phalanx office, confirming the relationship between the typesetters of the Phalanx and of Binns' book. Beginning with New Series No. 5 (issue No. 62) October 1842 there is a notice at the end of each issue that the magazine was "Printed at the Composing Machine Establishment, No. 110 Chancery Lane, Fleet Street." This was James Young's business address. This notice continued on each issue until the magazine curtailed publication with no. 69, May, 1843.

However, we may surmise the reasons. Like other early mechanical compositors, the Young & Delcambre machine set a single continuous line of type; line breaking and justification were done later by hand. The inventors also provided a machine for distribution of the type after it was used. In order to justify the high cost of the machine and still provide a cost saving to printers the inventors designed the machine to be operated by women, who at this time typically were paid half the wages of men. However, at this stage in the development of machine typesetting, the labor savings in operating the machine and distributing the type did not provide enough economic incentive to replace the manual process, especially since much of the manual process was done by boys, who were paid far less than men, in the days of child labor before labor reforms later in the 19th century. The economic and technical problems would not be fully addressed until the invention of the Linotype and Monotype type casters which eliminated the redistribution process by melting down the lead type for reuse. “The use of the Young and Delcambre machine was opposed by the London Union of Compositors, particularly because female labour was employed to operate it” (Printing and the Mind of Man: Catalogue of the Exhibitions. . . , no. 463).

Early efforts to mechanize typesetting coincided chronologically with Charles Babbage's attempts to mechanize calculation through his Difference Engines and his Analytical Engine, but because of the need to reduce the high cost of hand typesetting, which was, of necessity, extremely labor intensive, efforts to mechanize the process persisted in the industry while Babbage's goals were not successfully addressed or achieved until World War II, and its aftermath. With several inventors and companies addressing the problems of mechanizing typesetting, none of the systems achieved dominant market share until the wide application of the Linotype toward the end of the 19th century, and the beginning of the 20th.

Family Herald or Useful Information and Amusement for the Million:

Pierre-Simon Fournier Issues his "Manuel typographique," an Influential Manual of Types and Typefounding
Ottmar Mergenthaler Invents the Linotype
Tolbert Lanston Invents the Monotype Machine
The Intertype "Fototypesetter" is Invented
From Lead to Light: Lumitype, the First Successful Phototypesetting Machine, and the First Books it Typeset
At the Los Angeles Times Computers Control Hyphenation & Justification of Text Set by Linotype Hot Metal Typesetters
Compugraphic Develops the First General Typesetting Computers
The Courier Monospaced Typeface Debuts
Bob Brown: Visionary of New Reading Machines and Changes in the Process of Reading
The Caxton Quadricentennial Celebration: Probably the Largest Exhibition on the History of Printing Ever Held; Collecting its Publications