These are the figures referred to in the text of Martin's patent from which I have quoted. 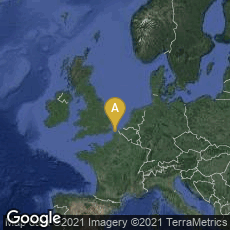 Mackie's typesetting machine was driven by punched paper tape rolls shown in the hands of the operator in this image from 1871. The caption claims that the machine was steam-driven.

In 1849 inventor William Martin of St. Pierre-les-Calais, France, who characterized himself as a "mechanist," received British patent No. 12,421 for "Certain Improvements in Machinery for Figuring Fabrics, Parts of which Improvements are applicable to Playing certain Musical Instruments, and also to Printing and other like Purposes."

Besides describing improvements to Jacquard punched card or punched paper apparatus for weaving and for playing musical instruments such as a player piano, Martin described in his patent specification how his invention was applied to typesetting. Martin believed that the method would both speed up the typesetting process, and also allow typesetting information to be stored for future use in later editions. In his patent specification he wrote:

"A somewhat similarly constructed apparatus to that just described as applicable for playing musical instruments may also be applied to machinery or apparatus for composing or setting up type for letter-press printing. It is well known that types have been composed or set up by machinery, and that the mechanism of the apparatus generally employed for this purpose consists of a series of levers in connection with the keys of a finger board, arranged in somewhat the same manner as the keys of a pianoforte, organ, or other similar keyed instrument. The types are arranged in vertical columns behind these levers, and by depressing one of the keys with the finger the corresponding lever will be brought into action and a type or letter thereby pushed out from its column into a channel, along which it is carried to the composing stick. My improvements are applicable to any of the machines now in use, and which are worked by means of a key-board or other similar arrangement of levers that are acted on by the fingers of the compositor. In the Drawing, however, I have only shewn the Invention as applied to a machine constructed on the principle of Messrs. Clay and Rosenborg's Invention, in which the types are arranged in columns in front of an endless travelling belt or band on which they are published by small levers whenever the corresponding key is depressed.

"Figure 17 represents a section of a cylinder with moveable pins or pegs, and precisely similar in construction and operation to the cylinder shewn at Figures 12, 13, and 14. In order to avoid complexity in the Drawings, I have not thought it necessary to shew more than two or three pins or pegs; but it will of course be understood that the cylinder must be furnished with the property quantity of moveable pins arranged all round, as shewn in the other Figures. The perforated paper h passes over a slotted plate i, as in the former instance, and the perforation may be made in the paper either by means of a series of finger levers corresponding with the letters or characters , or by means of the reading machine already described. The operation of the apparatus is as follows:— The perforated paper h is made to pass slowly over the slotted plate i, the pin cylinder B being caused to rotate in the same direction, and at the same speed. By this means the pins or pegs c will be brought into contract with the perforated paper, and if they meet with holes in the paper they will enter, and thus causing their outer collars 2 to pass outside the supporting ring or guide g, as shewn at 3; the pin thus kept out will continue its progress until it reaches the under side of the bell-crank lever x, the outer end of which will therby be lifted up, and by means of a pusher w, at the opposite of the other arm of the lever, will push a single type or character out from the bottom of the column v into a channel in which (in Clay and Rosenborg's machine) there is a travelling endless band, which carries the type or character (thus thrust out) into the composing stick. Immediately that the pin or peg c escapes from the end of the lever x, the latter is brought back again into its original position by means of the spring y, and the pin or peg c continues its progress until it again comes in contact with another portion of the perforated paper; and if it meets with an unperforated part, it will be thrust inwards as seen at 4 (Fig. 12). It will of course be understood, that instead of pushing out the type or character on to the endless band, and therby carrying forward to the composing stick it may be pushed into an inclined channel, down which it will slide by its weight, as in the type-composing machines of Messrs. Young and Delcambre. The advantages resulting from the application of the perforated sheet of paper to this purpose are, that when once the paper is placed in the machine it will only be necessary to communicate motion to the several parts of the machine; as, as the peg or pin barrel b and the perforated paper rotate, the type will be set up or composed without further trouble; whereas, in the machines already existing, it requires a great deal of practice to be accustomed to the key or finger board and to work or set up the type with speed. Another advantage is, that when once a perforated paper has been made, it may, after being used, be kept until a second or third edition of the book to be printed is required, when it will only be necessary to place the paper in the machine and actuate the mechanism, and the type will be quickly composed or set up without the aid of a skilled workman."

Thompson, History of Composing Machines  (1904) p. 12  states that Martin's advanced ideas were not actually applied in the typesetting industry until 1867 when Alexander Mackie introduced it in his typesetting machine called the "Pickpocket." In 1887 Tobert Lanston invented the Monotype which was driven by punched paper rolls.

The Most Famous Image in the Early History of Computing

The Monotype Monomatic Hot Type Machine is Introduced
Tolbert Lanston Invents the Monotype Machine
From Lead to Light: Lumitype, the First Successful Phototypesetting Machine, and the First Books it Typeset
The Times New Roman Typeface Debuts
Bob Brown: Visionary of New Reading Machines and Changes in the Process of Reading
The Caxton Quadricentennial Celebration: Probably the Largest Exhibition on the History of Printing Ever Held; Collecting its Publications
The Fitzwilliam Museum Exhibition of Printing, Precursor to "Printing and the Mind of Man" is Aborted on Account of War
The Monotype Converts to Hot-Metal Casting
Bruce Rogers Creates Monotype Centaur
Binns' "Anatomy of Sleep": The First Book Known to Have Been Typeset by a Composing Machine (Young & Delcambre's Pianotyp)