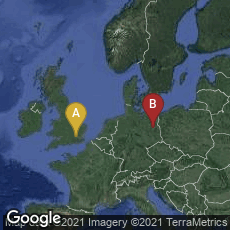 For the Festival of Britain Exhibition of Science in South Kensington, London, which opened on May 5, 1951 in commemoration of the hundredth anniversary of the Great Exhibition of 1851, Ferranti built a special purpose computer called NIMROD that played the ancient game of Nim, a mathematical game of strategy.

NIMROD was the first digital computer designed specifically to play a game, though its actual purpose was to illustrate the principles of the digital computer to the public when almost no one had seen or interacted with a computer. Because of the number of vacuum tubes involved, the machine was 12 feet wide, 5 feet tall and 9 feet deep. When the Festival of Britain ended, in October 1951, the computer was displayed at the Berlin Industrial Show. According to the Wikipedia article on Nimrod (computing), so significant was the computer considered when it was exhibited in there that "famous German politicians were present including Konrad Adenauer, the Federal Chancellor of the Federal Republic of Germany (FRG) and Ludwig Erhard, the Federal Minister for Economic Affairs."

In Berlin, the NIMROD

"was so popular that people ignored the free beer (in Berlin!!!...though the beer was English beer, I suppose). The beer was at the other end of the same room but people instead watched the 'electronic brain' beat its human competitors. In part the excitement was caused because on the first day Nimrod had beaten Ludwig Erhard, the German Federal Minister for Economic Affairs, three times in a row. The age of computers outwitting humans had started" (http://www.cs4fn.org/binary/nim/nim.php, accessed 02-01-2014).

NIMROD was conceived by Ferranti employee John M. Bennett, who received his PhD in computing at Cambridge under Maurice Wilkes, and later became the first professor computer science in Australia. Bennett got the idea of a Nim-playing computer from the Nimatron, an electro-mechanical machine exhibited at the 1939-1940 World’s Fair in New York City.

"Ferranti had undertaken to display a computer at the 1951 Festival of Britain, and late in 1950 it became evident that this promise could not be fulfilled. I suggested that a machine to play the game of NIM against all comers should be constructed with a versatile display to illustrate the algorithm and programming principles involved. The design was implemented by a Ferranti engineer, Raymond Stuart-Williams, who later joined RCA.

"In its simplest form, two players with several piles of, say, matches play the game of Nim. The players move alternately, each removing one or more of the matches from any one pile. Whoever removes the last match wins.

" The machine was a great success but not quite in the way intended, as I discovered during my time as spruiker on the Festival stand. Most of the public were quite happy to gawk at the flashing lights and be impressed. A few took an interest in the algorithm and even persisted to the point of beating the machine at the game. Only occasionally did we receive any evidence that our real message about the basics of programming had been understood" (http://www.goodeveca.net/nimrod/bennett.html, accessed 02-01-2014).

A reduced size replica of Nimrod was later built for the Computerspielemuseum Berlin.