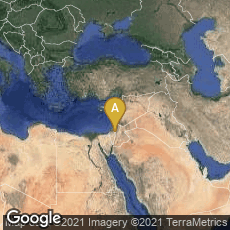 "Registration document for four date orchards owned by Babatha, a 2nd century Jewish woman. This is one of 35 papyrus scrolls belonging to her that were found in the Cave of Letters."

In 1953 the "Cave of Letters" was discovered by Bedouin of the Ta`amireh tribe in the desert near the border of Israel and Jordan on the west shore of the Dead Sea. The cave is in a ravine called the Nahal Hever, about 20 km south of the site where the Dead Sea Scrolls were found. This cave eventually yielded papyri recording Israel's second century revolt against Roman rule, as well as a unique cache of business documents of, Babatha, an upper middle class woman in Israel at the time.

The location came to the attention of Israeli authorities after the sale in 1953 of some letters written by Simon Bar-Kokhba, the Jewish leader of the Bar Kokhba Revolt against the Roman Empire in 132 CE. These letters were found in the caves of a canyon called Wadi Murraba. At the time the Israel Department of Antiquities conducted a preliminary exploration, but did not take further action until more documents from the Bar-Kokhba Revolt were sold to scholars in Jordan. On March 23, 1960 four groups of scientists and qualified experts began their exploration of the desert region with the assistance of the Israeli Defense Forces. Former Chief of Staff of the Israel Defense Forces and archaeologist Yigael Yadin led a team that found the "Cave of Letters."

This cave included very significant finds of artifacts and textiles, including a complete set of clothes worn by Jews of the 1st and 2nd century. Letters found in the cave included very detailed letters and orders by Simon bar Kokhba. In a second search of the cave in 1961 artifacts and objects of everyday living were found in a hidden crevice, along with a bundle of documents and six reeds containing papyri rolled inside them. Discovered in a leather pouch along with two other documents, these documents record various land transactions, some being dealt with by Bar-Kokhba’s administrators during his first year as President of Israel. Another one described the terms in which the lands of En-gedi, an oasis in Israel, would be leased. Another larger bundle of documents would be known as Barbatha's (Barbata's) cache. This group is of particular significance for the light it sheds on the business life and legal rights of an upper middle class Jewish woman at the time.

"Babatha was a Jewish woman who lived in the port town of Maoza in modern-day Jordan at beginning of the 2nd century CE. . . . The documents found include such legal contracts concerning marriage, property transfers, and guardianship. These documents, ranging from CE 96 to 134, depict a vivid picture of life for an upper-middle class Jewish woman during that time. They also provide an example of the Roman bureaucracy and legal system under which she lived.

"Babatha was born in approximately 104 CE in Maoza. Most likely the only child or the eldest daughter, she inherited her father’s date palm orchard upon her parents’ deaths. By 124 CE, she had been married and widowed with a young son, Jesus. She was remarried by 125 CE to Judah, owner of three date palm orchards in Ein Gedi, who had another wife and teenage daughter. It is uncertain whether Babatha lived in the same home as the first wife or if Judah traveled between two separate households, as polygamy was still allowed in the Jewish community.

"The documents concerning this marriage offer insight to her status in the relationship. In their marriage contract, Judah’s debts become part of her liability, indicating a financial equality. In 128 CE, a legal document shows that Judah took a loan without interest from Babatha, showing that she had control of her own money despite the union. Upon Judah’s death in 130 CE, she seized his estates in Ein Gedi as a guarantee against his debts which she had covered as stated in the marriage contract.

"Another document of importance concerns the guardianship of Babatha’s son. In 125 CE, Babatha brought a suit to court against the appointed guardians of her orphaned son, citing their insufficient disbursement of funds. The document contains Babatha’s petition that full guardianship responsibility of her son and his property be transferred to her control.

"The latest documents discovered in the pouch concern a summons to appear in an Ein Gedi court as Judah’s first wife, Miriam, had brought a dispute against Babatha regarding their late husband’s property. Therefore, it is assumed that Babatha was near Ein Gedi in 132 CE, placing her in the midst of the Bar Kokhba's revolt. It is likely that Babatha fled with Miriam and her family from the imminent violence of the revolt. Because the documents were never retrieved and because twenty skeletal remains were found nearby, historians have suggested that Babatha perished while taking refuge in the cave" (Wikipedia article on Babatha, accessed 02-23-2014).

"Many of the papyri in the Babatha archive, including the marriage contract . . .were what are called 'double documents.' The text would be written twice on the same papyrus, with one copy written about the other. The upper (inner) portion of the papyrus [roll], with the first copy, was rolled up and fastened with string to protect the text and prevent tampering with it. The second copy, on the lower (outer) portion [of the roll], would be accessible, and its veracity could be checked, if necessary by comparison with the upper text. 'Double documents' are rare in Egypt. . . but evidently more common further east, as they are found also at Dura Europos . . . " (Grubbs, Women and the Law in the Roman Empire: A Sourcebook. . . . [2002] 131).

The story of the discovery of the the "Cave of the Letters" was vividly retold in a fine illustrated book by Yigael Yadin entitled, Bar-Kokhba. The rediscovery of the legendary hero of the second Jewish Revolt against Rome (1971). In his book Yadin reproduced the letters from Simon Bar-Kokhba that were discovered, along with the large number of other artifacts. In chapter 16 he described the life and trials of Babtha (Babata) based on her documents. The chapter includes excellent photographs of the documents showing how the original bundle of documents looked, how the documents looked when the bundle was opened, and the problems of opening and reading the individual documents.