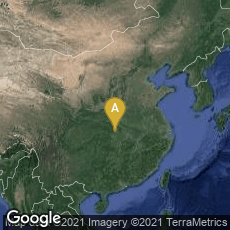 The Guodian Chu Slips: "Like the Discovery of the Dead Sea Scrolls" The Guodian Chu Slips (Chinese: 郭店楚簡; pinyin: Guōdiàn Chǔjiǎn), comprising about 804 bamboos slips, or strips, containing "12072" Chinese characters, were discovered in 1993 in Tomb no. 1 of the Guodian tombs in Jingmen, Hubei, China. The tomb was dated to the latter half of the Warring States period, and it is thought that the texts were written on the bamboo strips before or close to the time of burial.

"The tomb is located in the Jishan District's tomb complex, near the Jingmen City in the village of Guodian, and only 9 kilometers north of Ying, which was the ancient Chu capital from about 676 BC until 278 BC, before the State of Chu was over-run by the Qin. The tomb and its contents were studied to determine the identity of the occupant; an elderly noble scholar, and teacher to a royal prince. The prince had been identified as Crown Prince Heng, who later became King Qingxiang of Chu. Since King Qingxiang was the Chu king when Qin sacked their old capital Ying in 278 BC, the Chu slips are dated to around 300 BC.

There are in total about 804 bamboo slips in this cache, including 702 strips and 27 broken strips with 12072 characters. The bamboo slip texts consist of three major categories, which include the earliest manuscripts of the received text of the Tao Te Ching, one chapter from the Classic of Rites, and anonymous writings. After restoration, these texts were divided into eighteen sections, and have been transcribed into standard Chinese and published under the title Chu Bamboo Slips from Guodian on May 1998. The slip-texts include both Daoist and Confucian works, many previously unknown, and the discovery of these texts in the same tomb has contributed fresh information for scholars studying the history of philosophical thought in ancient China. According to Gao Zheng from the Institute of Philosophy of the Chinese Academy of Social Sciences, the main part could be teaching material used by the Confucianist Si Meng scholars in Jixia Academy. Qu Yuan, who was sent as an envoy in State of Qi, might have taken them back to Chu (Wikipedia article on Guodian Chu Slips, accessed 01-31-2010).

" 'This is like the discovery of the Dead Sea Scrolls,' says Tu Weiming, director of the Harvard Yenching Institute (HYI), who has played a key role in the preservation of, accessibility to, and research on the Guodian materials since 1996.

"The 800 bamboo strips bear roughly 10,000 Chinese characters; approximately one-tenth of those characters comprise part of the oldest extant version of the Tao Te Ching (also known as Daodejing), a foundational text by the Taoist philosopher Laozi, who lived in the sixth century B.C. and is generally considered the teacher of Confucius. The remaining nine-tenths of the writings appear to be written by Confucian disciples, including Confucius' grandson Zisi, in the first generation after Confucius' death. (Confucius lived from 551 to 479 B.C.) These texts amplify scholars' understanding of how the Confucian philosophical tradition evolved between Confucius' time and that of Mencius, a key Confucian thinker who lived in the third century B.C.