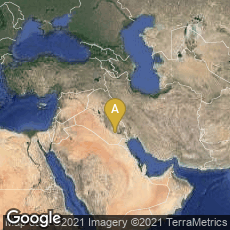 Discovery of the "Ark Tablet": Decoding the Story of the Flood In 2009 British Museum curator Irving Finkel, an expert on cuneiform inscriptions on clay tablets from ancient Mesopotamia, received for examination and translation what came to be known as the "Ark Tablet" from its owner Douglas Simmonds. This is the only cuneiform tablet with precise instructions as to how to build the Ark described in the early accounts of the flood, best known through later accounts in literature, such as the Epic of Gilgamesh. The Ark Tablet provided instructions for building the Ark in the form of a very large round boat called a coracle.

According to Finkel, the tablet dates from 1900-1700 BCE, though the tablet was not dated by the scribe. However, comparatively precise dating can be done from the character and composition of the cuneiform signs and from grammatical forms and usages. The tablet measures 11.5 x 6.0 cm and contains exactly 60 lines of cuneiform script written out ably and without error. In The Ark Before Noah. Decoding the Story of the Flood (2014) Finkel illustrated the tablet and translated its contents on pp. 107-110. Incidentally Finkel's well-illustrated book is a masterpiece of writing about relatively abstruse subjects for the general public. So geared to a non-scholarly audience is this book that footnotes are not even mentioned in the text. One has to search for them at the back of the book.

In the British Museum blog announcing his book on January 23, 2014 Finkel summarized his conclusions in this way:

"When the gods decided to wipe out mankind with a flood, the god Enki, who had a sense of humour, leaked the news to a man called Atra-hasis, the ‘Babylonian Noah,’ who was to build the Ark. Atra-hasis’s Ark, however was round. To my knowledge, no one has ever thought of that possibility. The new tablet also describes the materials and the measurements to build it: quantities of palm-fibre rope, wooden ribs and bathfuls of hot bitumen to waterproof the finished vessel. The result was a traditional coracle, but the largest the world had ever dreamed of, with an area of 3,600 sq. metres (equivalent to two-thirds the area of a football pitch), and six-metre high walls. The amount of rope prescribed, stretched out in a line, would reach from London to Edinburgh!

"To anyone who has the typical image learnt from children’s toys and book illustrations in mind, a round Ark is bizarre at first, but, on reflection, the idea makes sense. A waterproofed coracle would never sink and being round isn’t a problem – it never had to go anywhere: all it had to do was float and keep the contents safe: a cosmic lifeboat. Palm-and-pitch coracles had been seen on the Euphrates and Tigris rivers since time immemorial: they were still a common sight on Iraq’s great waterways in the 1950s."

In an article in The Guardian published on January 24, 2014 Finkel was quoted as saying, "I am 107% convinced the ark never existed."

"Finkel describes the clay tablet as 'one of the most important human documents ever discovered', and his conclusions will send ripples into the world of creationism and among ark hunters, where many believe in the literal truth of the Bible account, and innumerable expeditions have been mounted to try to find the remains of the ark.

"The clay tablet is going on display at the British Museum, loaned by Simmons, beside a tablet from the museum's collection with the earliest map of the world, as seen from ancient Babylon. The flood tablet helped explain details of the map, which shows islands beyond the river marking the edge of the known world, with the text on the back explaining that on one are the remains of the ark.

"Finkel said that not only did the ark never exist, but ark hunters were looking in the wrong place – the map shows the ark in the direction of, but far beyond the mountain range later known as Ararat."

The Epic of Gilgamesh, Probable Source of Aspects of Biblical and Homeric Literature
Using Carrier Pigeons for Communication in Antiquity