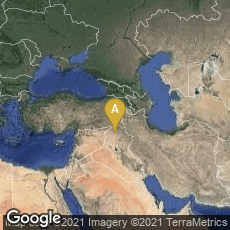 The Epic of Gilgamesh, Probable Source of Aspects of Biblical and Homeric Literature Neo-Assyrian clay tablet. Epic of Gilgamesh, Tablet 11: Story of the Flood. Known as the "Flood Tablet". From the Library of Ashurbanipal, 7th century BCE. British Museum.

The most complete and "standard" Akkadian version of the Epic of Gilgamesh, one of the earliest known works of literary fiction, was written in standard Babylonian, a dialect of Akkadian that was only used for literary purposes, and compiled out of older legends by the Mesopotamian incantation/exorcist priest Sîn-lēqi-unninni, sometime between 1300 and 1000 BCE. Various themes, plot elements, and characters in the Epic of Gilgamesh have counterparts in the book of Genesis, notably the accounts of the Garden of Eden and Noah's Flood.

"Gilgamesh, we can be sure, was a real man. he was an early king of Uruk who founded a short-lived dynasty at the beginning of the historical period. All the surviving literary traditions about Gilgamesh point to a figure of power and charisma that long-outlasted his own lifetime. The cycle of stories that came to circulate about his name testify to this, and the impression that he was a man out of the same box as Alexander the Great, the impact of whose death led to narratives far beyond the sober scope of the historians who first tackled his life and times" (Irving Finkel, The Ark Before Noah. Decoding the Story of the Flood [2014] 82).

The standard version of the epic was recorded on twelve cuneiform tablets, of which the ark story appeared in tablet 11. These were discovered in 1853 by the Assyrian and Christian Assyriologist Hormuzd Rassam in the library of Ashurbanipal in Nineveh. Rassam, the protegé of British archaeologist Austen Henry Layard, who had accompanied Layard in his second expedition to iraq from 1849 to 1851, discovered the tablets after Layard left archaeology and began a political career. The deciphering of the twelve tablets in 1872 by George Smith at the British Museum, where the tablets are preserved, caused this epic to be rediscovered by the world. Smith's first published account of the tablets appeared in Chaldean Account of the Deluge. Terra Cotta Tablets Found at Nineveh, and Now in the British Museum. Two Photographs. Translation and Text by Geo. Smith. . . , Photographed by Stephen Thompson, London: Mansell, 1872.

"The parallels between the stories of Enkidu/Shamhat and Adam/Eve have been long recognized by scholars. In both, a man is created from the soil by a god, and lives in a natural setting amongst the animals. He is introduced to a woman who tempts him. In both stories the man accepts food from the woman, covers his nakedness, and must leave his former realm, unable to return. The presence of a snake that steals a plant of immortality from the hero later in the epic is another point of similarity.

"Andrew R. George submits that the flood myth in Genesis 6–8 matches that in Gilgamesh so closely that 'few doubt' that it derives from a Mesopotamian account. What is particularly noticeable is the way the Genesis flood story follows the Gilgamesh flood tale "point by point and in the same order", even when the story permits other alternatives.

"In a 2001 Torah commentary released on behalf of the Conservative Movement of Judaism, rabbinic scholar Robert Wexler stated: 'The most likely assumption we can make is that both Genesis and Gilgamesh drew their material from a common tradition about the flood that existed in Mesopotamia. These stories then diverged in the retelling.'

"Matthias Henze suggests that Nebuchadnezzar's madness in the biblical Book of Daniel draws on the Epic of Gilgamesh. He claims that the author uses elements from the description of Enkidu to paint a sarcastic and mocking portrait of the king of Babylon.[22]

"Many scholars note an influence on the book of Ecclesiastes.The speech of Sidhuri in an old Babylonian version of the epic is so similar to Ecclesiastes 9:7–10 that direct influence is a possibility. A rare proverb about the strength of a triple-stranded rope is common to both books.

"Numerous scholars have drawn attention to various themes, episodes, and verses, that indicate a substantial influence of the Epic of Gilgamesh on both of the epic poems ascribed to Homer. These influences are detailed by Martin Litchfield West in The East Face of Helicon: West Asiatic Elements in Greek Poetry and Myth. According to Tzvi Abusch of Brandeis University, the novel "combines the power and tragedy of the Iliad with the wanderings and marvels of the Odyssey. It is a work of adventure, but is no less a meditation on some fundamental issues of human existence" (Wikipedia article on Epic of Gilgamesh, accessed 03-09-2014).

Layard's Discoveries in Nineveh and Babylon: One of the Most Remarkable Publisher's Cloth Bindings of the 19th Century