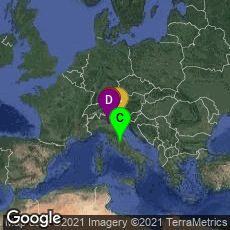 Dante Alighieri's La Commedia first appeared in print in 1472; during that year three printed editions were issued. On April 11, 1472 Johann Numeister and Evangelista [Angelini?] completed the printing of the earliest dated edition in the town of Foligno, Italy. (ISTC No.: id00022000.) Of the 300 copies printed of this edition, 14 copies are recorded. According to the Wikipedia, the original printing press used for the book is on display in the Oratorio della Nunziatella in Foligno.

The second dated edition was completed on July 18, 1472 by Federicus de Comitibus of Verona, and probably issued from Venice. According to ISTC No. id00024000, only five copies of this edition are recorded, of which three are imperfect.

A third edition, dated 1472, but without specification of day or month, was issued  in Mantua by Georgius de Augusta and Paulus de Butzbach for Columbinus Veronensis. According to ISTC No. id00023000, 17 copies are recorded in insitutions.