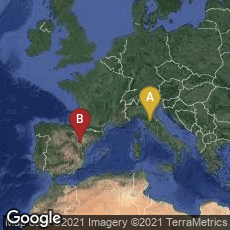 One of the very greatest of the illuminated manuscripts of Dante's Divina Commedia is Yates Thompson MS 36, preserved in the British Library. In 1993 John Pope-Hennessy proposed a date for the manuscript of between 1444 and 1450, partly depending on the representations of the dome and cupola of Florence Cathedral, which was under construction during these years. This manuscript, which originated in Tuscany, has a very interesting provenance:

In March 2014 a digital facsimile of Yates Thompson MS 36 was available from the British Library at this link.