Final leaf and colophon of the Aldine edition of Pollux's Onomasticon (1502). 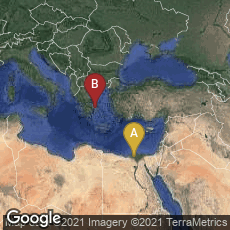 Pollux's Onomasticon, the Oldest Specimen of Encylopedism Surviving from Antiquity Page opening from the Aldine edition of Pollux's Onomasticon (1502) the first edition in Greek.

Julius Pollux's (Ἰούλιος Πολυδεύκηςis) Onomasticon, a thesaurus of Attic Greek synonyms and phrases arranged thematically in ten books, is the oldest specimen of encyclopedism surviving from antiquity. It is also the only surviving Greek lexical work with an onomastic structure— not an alphabetic sequence of lemmata but topical assemblages of synonyms.

One of the most significant intellectuals of the later second century CE, the apogee of Hellenism under the Roman Empire, Pollux, born in the city of Naucratis in Egypt, was a Greek sophist and grammarian. He received instruction in criticism from his father, and afterwards went to Athens, where he studied rhetoric under the sophist Adrian. He opened a private school at Athens, where he gave instruction in grammar and rhetoric, and was subsequently appointed by the emperor Commodus to the chair of rhetoric at Athens. He died during the reign of Commodus at the age of fifty-eight.

The Onomasticon, Pollux's only surviving work, is divided into ten books, each of which contains a short dedication to Commodus as Caesar indicating that the work was published before 177 CE, since Commodus became Augustus in that year. Each book forms a separate treatise by itself, containing the most important words relating to certain subjects, with short explanations of the meanings of the words, which are frequently illustrated by quotations from ancient writers. Instead of an alphabetical arrangement, the words are given according to the subjects treated of in each book. The object of the work was to present youths with a kind of store-house, from which they could borrow all the words of which they had need, and could at the same time learn their usage in the best writers.  Subject matter of the ten books is as follows:

"1. Of the gods and their worship, of kings, of speed and slowness, of dyeing, of commerce and manuftactures, of fertility and the contrary, of time and the divisions of the year, of houses, of ships, of war, of horses, of agriculture, of the parts of the plough and the waggon, and of bees.

2. The second treats of man, his eye, the parts of his body and the like.

3. Of relations, of political life, of friends, of the love of country, of love, of the relation between masters and slaves, of money, of travelling, and numerous other subjects.

4. Of the various branches of knowledge and science.

8. Of the courts, the administration of justice, &c.

10. Of various vessels, &c."(Smith, W. Ed. A Dictionary of Greek and Roman Biography and Mythology from Perseus Digital Library, accessed 01-24-2015).

“It supplies in passing much rare and valuable information on many points of classical antiquity— objects in daily life, the theater, politics— and quotes numerous fragments of lost works. Pollux was probably the person satirized by Lucian as a worthless and ignorant person who gains a reputation as an orator by sheer effrontery, and pilloried in his Lexiphanes, a satire upon the affectation of obscure and obsolete words” (Encyclopaedia Britannica [1999]).

The Onomasticon did not survive in its original form; all manuscripts of its text derive from four incomplete exemplars which descend from a common hyparchetype— an epitome owned and interpolated by the Greek Orthodox theologian Arethas of Patrae, later Bishop of Caesarea in Cappadocia. One of the few known Byzantine book collectors, Arethas also owned the earliest surviving manuscripts of Euclid and Plato, among other items. The editio princeps of Pollux’s Onomasticon, issued by Aldus Manutius in 1502, made the work more widely available to Renaissance scholars and antiquaries for the first time.