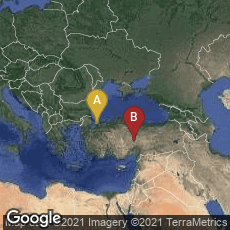 A: İstanbul, Turkey, B: Kayseri, Turkey

The d'Orville Euclid, the Oldest Dated Manuscript of a Classical Greek Author The d'Orville Euclid, dated 888, is the earliest "complete" manuscript of Euclid's Elements, and, according to the Bodleian Library exhibition catalogue, The Survival of Greek Literature, it is the oldest manuscript of a classical Greek author to bear a date.

Bodleian MS. d’Orville 301 was written on parchment in Constantinople by Stephanus Clericus, and bought by Arethas of Patrae, later Bishop of Caesarea in Cappadocia (Kayseri, Turkey) for 14 nomismata (gold coins).

"The hand of Stephanus is pure minuscule; Arethas added the scholia and some additional matter in small uncials."

From the death of Arethas (c. 939) the ownership of the manuscript is unknown until the seventeenth century, when it was acquired by the Dutch classicist J. P. D’Orville, most of whose collection was eventually purchased by the Bodleian Library in 1804.

Digital facsimile from Digital Bodleian at this link