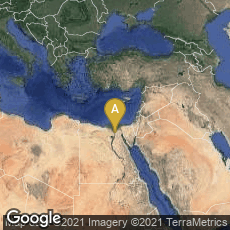 The First Indigenous Arabic Press is Established in Egypt The first book issued by the Bulaq Press, an Italian-Arabic dictionary by Raphael Antoine Zakhour, an Egyptian born Roman Catholic monk from Aleppo, who had accompanied Napoleon's French expedition on its return to France as a translator.

This was the first indigenous Arabic press set up in Egypt by Muslims. It was also the first government press on the African continent, apart from the short-lived presses briefly established by Napoleon during his Egyptian campaign.

"In 1815 he [Muhammad Ali] sent Nicolas Musabiki to Rome and Milan to study type-founding and printing. Muhammad Ali also ordered three presses from Milan - along with the necessary paper and ink from Leghorn and Trieste - and, when Musabiki returned, made him manager of the Bulaq Press, working under 'Uthman Nur al-Din. The press itself, in the meantime, had been established in old Nile port of Bulaq, now a suburb of Cairo, and shortly afterwards, the second, and largest, student mission - it numbered 44 students - had returned from Paris. These men, under the leadship of Rifa'a Bey Rafi' al-Tahtawi, had studied French with a view to the translation of technical books into Arabic. The most prolific of these translators turned out to be al-Tahtawi himself.

"Al -Tahtawi had been educated at al-Azhar University, then and now the most prestigious center for the study of the Islamic sciences in the Muslim world. There was apparently no opposition by the Shaikhs of al-Azhar to the innovation of printing. . . . Muhmmad Ali attached several professors from al-Azhar to the Bulaq Press to learn the art of printing; one became head of the foundry, another printer-in-chief, and others worked as compositors and proofreaders.

"Between 1822 and 1842, the press at Bulaq published 243 titles. . . . By far the largest number of books - 48 - were on military and naval subjects. Muhammad Ali had seen both the French and the English fleets in action, and realized how vulnerable Egypt was to invasion from the sea. He had also noted how successful the modern arms of the French had been against the antiquated weapons of the Mamluks.

"Interestingly though, the next largest category of books published by the Bulaq Press was poetry. Twenty-six works of poetry in Turkish, Persian and Arabic were published in the first 20 years of the press' operation; clearly the men associated with the Bulaq Press were as interested in traditional Islamic literature as they were in translation of European works on military tactics. After poetry comes grammar, with 21 titles, mathematics and mechanics with 16, medicine with 15 and veterinary medicine with 12. Thre rest of the books published by the press were on religion, botany, agriculture, political administration and so forth" (http://muslimheritage.com/topics/default.cfm?ArticleID=988, accessed 06-10-2012).

♦ In December 1822 the Bulaq Press issued its first book, an Italian-Arabic dictionary by Raphael Antoine Zakhour, an Egyptian born Roman Catholic monk from Aleppo, who had accompanied Napoleon's French expedition on its return to France as a translator:

Conforming with the idea of Muhammad Ali of "openness toward Europe to achieve development," Italian delegations were sent to Italy, and Italian became the first foreign language taught in Egyptian schools.