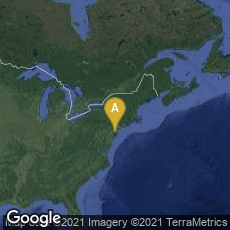 Schematic of a typical four-story SAGE direction center. The AN/FSQ-7 computers (A and B) occupy the second floor. The building had a massive HVAC system to cool the huge amount of electronics in the facility, including 49,000 vacuum tubes for computing system. The building could generate its own power.

In 1957 the first SAGE (Semi-Automatic Ground Environment)  AN/FSQ-7 (DC-01) computer was operational on a limited basis for the SAGE Air Defense System at McGuire Air Force Base in Burlington County, New Jersey.  Twenty-four  AN/FSQ-7s would eventually be built. The AN/FSQ-7 computer contained 49,000 vacuum tubes, occupied 0.5 acres (2,000 m2) of of floor space, weighed 275 tons, and used up to three megawatts of power. Performance was about 75,000 instructions per second. From the standpoint of physical dimensions, the 24 AN/FSQ-7s remain the largest computers ever built.

"Although the machines used a large number of vacuum tubes, the failure rate of an individual tube was low due to efforts in quality control and a novel quality assurance system called marginal checking that discovered tubes that were growing weak, before they failed. Each SAGE site included two computers for redundancy, with one processor on "hot standby" at all times. In spite of the poor reliability of the tubes, this dual-processor design made for remarkably high overall system uptime. 99% availability was not unusual."

The system allowed online access, in graphical form, to data transmitted to and processed by its computers. Fully deployed by 1963, the IBM-built early warning system remained operational until 1984. With 23 direction centers situated on the northern, eastern, and western boundaries of the United States, SAGE pioneered the use of computer control over large, geographically distributed systems.

"Both MIT and IBM supported the project as contractors. IBM's role in SAGE (the design and manufacture of the AN/FSQ-7 computer, a vacuum tube computer with ferrite core memory based on the never-built Whirlwind II) was an important factor leading to IBM's domination of the computer industry, accounting for more than a half billion dollars in revenue, nearly 10% of IBM's income in the late 1950s" (Wikipedia article on Semi-Automatic Ground Environment, accessed 03-03-2012).