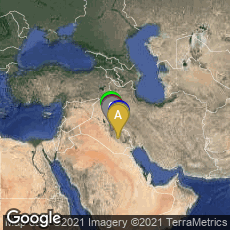 Tablet with proto-cuneiform pictographic characters (end of 4th millennium BC), Uruk III. This is thought to be a list of slaves names, the hand in the upper left corner representing the owner.[25]

Cuneiform writing in Mesopotamia began as a system of pictographs written with styli on clay tablets. The earliest cuneiform tablets. written in proto-cuneiform, were discovered in excavations of periods IV-III of the Eanna (Eana) district of Uruk (Warka) an ancient city of Sumer and later Babylonia, situated east of the present bed of the Euphrates river, some 30 km east of modern As-Samawah, Al-Muthannā, Iraq.

Between 1928 and 1976 approximately 5000 proto-cuneiform tablets were excavated at Uruk by the German Archaeological Institute.

"But these are not the only witnesses to the archaic script. Proto-cuneiform texts corresponding to the Uruk III [circa 3100 BCE] tablets have been found in the northern Babylonian sites of Jemdet Nasr, Khafajah, and Tell Uquair, testifying to the fact that the new technology spread quickly throughout Babylonia soon after its invention (in ancient Iran proto-cuneiform possibly inspired the proto-Elamite script ca. 3100 BC.) Illicit excavations since the 1990s account for several hundred additional texts, which possibly originate from the ancient Babylonian cities of Umma, Adab, and Kish. These texts have the advantage of being generally in better condition than those from Uruk, which, . . . represented discarded rubbish and thus are frequently fragmentary. To date the proto-cuneiform corpus numbers approximately six thousand tablets and fragments" (Christopher Woods, "The Earliest Mespotamian Writing," Chapter 2 of Woods, Teeter, Emberling (eds) Visible Language. Inventions of Writing in the Ancient Middle East and Beyond [2010] 35-36).

"The formation of an urban society and the innovations that came with it and which occurred for the first time in Uruk – a regional and supraregional centre – had an enormous impact on the entire Near-Eastern world. Very quickly, impressive temples and palaces sprung up, overshadowing the early grand architectural monuments in Uruk’s centre. A striking feature of these new buildings was their form, the ziggurat or stepped tower, which went on to become a defining element of ancient Near-Eastern temple architecture. The use of writing as an administrative tool also laid the foundations for science and learning in the ancient Near East. Very early on, lexical lists of terms and objects began to emerge – the first of their kind – and these were passed down the generations. Some of these records contain lists of city officials and specialist terms for occupations that provide an insight into a highly stratified society. Other records bear lexical lists of everyday objects, providing an insight into material culture. Particular importance was given very early on to observing the stars as a means to read the future. The ancient Babylonian palace of the ruler Sin-Kashid, built in the 2nd millennium BCE, exemplifies Uruk’s role as part of the ancient Near-Eastern empire. The palace served as both the seat of the ruler and as a commercial and administrative centre. It was here that diplomatic correspondence, legal contracts, surety bonds, and various court documents were set in writing. The site also served as a lively trading centre. Deliveries of raw materials were processed into valuable goods that denoted the owner’s status. The palace was also a place where writers were educated. The writers played a vital role in everyday life, as they compiled the correspondence and contractual agreements on behalf of the largely illiterate population" (http://www.uruk-megacity.de/index.php?page_id=6, accessed 01-13-2013).

"Writing emerged in the context of temple bureaucracy in the cities of the southern Iraqi marshes some time in the late fourth millennium BC. A tiny number of accountants used word signs (usually pictograms) and number signs to account for institutional assets — land, labor, animals — and their secondary products. They wrote on refined clay tablets, about the size of a credit card but around 1 cm thick, incising the signs for the objects they were recording with a pointed stylus and impressing the numbers with a cylindrical one. The front surface of the tablet was marked out into boxes, each one containing a single unit of accounting, logically ordered, with the results of calculations (total wages, predicted harvests, and so on) shown on the back. This writing was barely language-specific — it represented concrete nouns, numbers and little else, with only occasional clues to pronunciation and none at all to word order — and was known only to a handful of expert users. Its functionality was as yet so limited that it was used only to keep accounts, or to practice writing the words, numbers, and calculations needed for accountancy" (Robson, "The Clay Tablet Book in Sumer, Assyria, and Babylonia," Elliot & Rose [eds.] A Companion to the History of the Book [2007] 67-68.)

"Indeed that the vast majority of the earliest texts [discovered at Uruk and elsewhere in Mesopotamia] are administrative in nature suggests that the invention of writing was a response to practical social pressures—simply put, writing faciliated complex bureaucracy. It is important to stress in this connection that literature plays no role in the origins of writing in Mesopotomia. Religious texts, historical documents and letters are not included among the archaic text corpus either. Rather, these text genres arise relatively late, beginning in the middle of the third millennium, some seven hundred or more years after the first written evidence" (Woods, op. cit, 34).