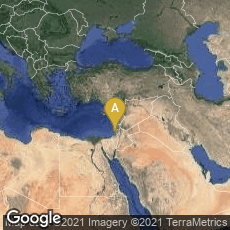 The Izbet Sartah Abecedary, One of the Best Examples of the Proto-Canaanite Alphabet Image Source: earlysemitic.weebly.com
The Izbet Sartah Abecedary, beneath which is a modern tracing of the writing. The Israel Museum, Jerusalem.

In 1976 the Iszbet Sartah Abecedary, an ostracon, was discovered in Izbet Sartah, (`Izbet S.art.ah, near Aphek), perhaps 'Eben-`Ezer,Israel. Dated to the 12th or early 11th century BCE, it is the early known non-cuneiform abecedary. The inscription was written by an unskilled scribe, probably a student, and consists of four lines of writing exercises, followed by the 22 letters of the Proto-Canaanite (Ancient Hebrew) alphabet on the fifth line.

"The Proto-Canaanite alphabet is a consonantal alphabet of twenty-two acrophonic glyphs, found in Levantine texts of the Late Bronze Age (from ca. the 15th century BC), by convention taken to last until a cut-off date of 1050 BC, after which it is called Phoenician. About a dozen incriptions written in Proto-Canaanite have been discovered in modern-day Israel and Lebanon.

"While a descendant script from the Egyptian hieroglyphs, it is also the parent script of Phoenician, itself the ancestor of nearly every alphabet in use today, from Arabic, Greek, Hebrew, Roman, and Berber in the West to Thai, Mongol, and perhaps Hangul in the East. The Hebrew alphabet remains the closest to its predecessor, as only the form of the letters has been modified—unsurprising, since Hebrew is a Canaanite language and had, in its original pronunciation, roughly the same set of consonants as the dialect that the alphabet was devised for."