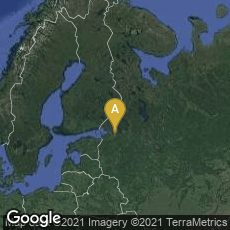 In October 1920 Russian and Soviet physicist and inventor Lev Sergeevich Termen, known in the West as Léon Theremin, working at the Ioffe Physical-Technical Institute of the Russian Academy of Sciences in Saint Petersburg, invented the Theremin, one of the first electronic musical instruments, and the first musical instrument that was played without being touched. The instrument was invented as the result of research into proximinity sensors. It was originally known as the ætherphone/etherphone, thereminophone or termenvox/thereminox.

"The controlling section usually consists of two metal antennas which sense the position of the player's hands and control radio frequency oscillator(s) for frequency with one hand, and volume with the other. The electric signals from the theremin are amplified and sent to a loudspeaker. The theremin is an electrophone, a subset of the quintephone family.

"To play, the player moves his or her hands around the antennas, controlling frequency (pitch) and amplitude (volume). The theremin is associated with an "eerie" sound, which has led to its use in moviesoundtracks such as those in Spellbound, The Lost Weekend, and The Day the Earth Stood Still. Theremins are also used in art music (especially avant-garde and 20th century "new music") and in popular music genres such as rock."

". . . After positive reviews at Moscow electronics conferences, Theremin demonstrated the device to Bolshevik leader Vladimir Lenin. Lenin was so impressed with the device that he began taking lessons in playing it, commissioned six hundred of the instruments for distribution throughout the Soviet Union, and sent Theremin on a trip around the world to demonstrate the latest Soviet technology and the invention of electronic music. After a lengthy tour of Europe, during which time he demonstrated his invention to packed houses, Theremin found his way to the United States, where he patented his invention in 1928 (US1661058 ). Subsequently, Theremin granted commercial production rights to RCA."

In April 2014 I was surprised to learn that Robert Moog, best known for his invention of the Moog Synthesizer, began his career in 1954 by building Theremins. In April 2104 the Moog website stated:

"The Moog Music story begins in 1954, when a young Bob Moog began building theremins, one of the oldest electronic instruments, and the only one known that you play without touching, in his basement with his father. For the uninitiated, the theremin is a single oscillator instrument that uses two metal rod antennas to control pitch and amplitude. The left antenna (a horizontal hoop) reduces the amplitude as the left hand is moved closer to it, while the right antenna (a vertical pole) increases the pitch as the right hand is moved towards it. For the last 57 years, the company Bob Moog founded has sold more theremins to more professionals than anyone in history. When it comes to quality, dependability, and tone, no one can touch the Etherwave Theremin."