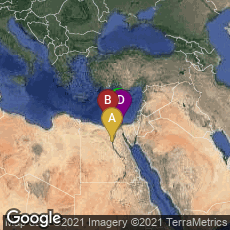 The earliest Egyptian printed cloth dates from the 4th century.

"In his Natural History, Pliny states that this technique [printing on textiles] was particularly utilized in Egypt. Printed material is only represented by fabrics of the fourth century at the earliest and continues until the Arab period.  In those days, there were great textile centers such as Alexandria, Panopolis, Oxyrhynchus, Tinnis [Tennis] and Damietta, but regrettably we know this only from texts, because any trace of weaving shops and their fragile wooden looms has vanished.  However, by studying the fabrics themselves, scholars are often able to derive their origins.

"Actually, only two groups of fabrics have been dated with any certainty. One group was a pair of medallions and a band of flax and purple wool coming from a tomb in Hwara in the Fayoum Oasis, which were found together with a coin dated to 340 AD. These medallions are adorned in a manner that is virtually identical with that of painted Egyptian shrouds of the Roman period and fabrics discovered in Syria. Next to the body of Aurelius Colluthus, in his tomb at Antinoe, were discovered sales contracts and his will, all written in Greek between 454 and 456 AD. He was wrapped in a large tapestry with an upper tier showing two busts under arcades supported by two large columns. A geometrical network with florets and leaves covers the space between the columns, which is a composition very similar to the decorations in paintings and mosaics of the same period" (http://touregypt.net/featurestories/fabrics.htm, accessed 01-29-2010).