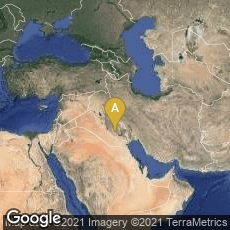 The Most Famous Document of Babylonian Mathematics The most famous original document of Babylonian mathematics is Plimpton 322, a partly broken clay tablet, approximately 13cm wide, 9cm tall, and 2cm thick. New York publisher George A. Plimpton purchased the tablet from archaeological dealer, Edgar J. Banks in 1922 or 1923, and bequeathed it with the rest of his collection to Columbia University in 1936. According to Banks, the tablet came from Senkereh, a site in sourthern Iraq, corresponding to the ancient city of Larsa.

This tablet has a table of four columns and 15 rows of numbers in cuneiform script, and has been called the only true mathematical table surviving from the period.

"The most renowned of all mathematical cuneiform tablets since it was published in 1945, Plimpton 322 reveals that the Babylonians discovered a method of finding Pythagorean triples, that is, sets of three whole numbers such that the square of one of them is the sum of the squares of the other two. By Pythagoras' Theorem, a triangle whose three sides are proportional to a Pythagorean triple is a right-angled triangle. Right-angled triangles with sides proportional to the simplest Pythagorean triples turn up frequently in Babylonian problem texts; but if this tablet had not come to light, we would have had no reason to suspect that a general method capable of generating an unlimited number of distinct Pythagorean triples was known a millennium and a half before Euclid.

"Plimpton 322 has excited much debate centering on two questions. First, what was the method by which the numbers in the table were calculated? And secondly, what were the purpose and the intellectual context of the tablet? At present there is no agreement among scholars about whether this was a document connected with scribal education, like the majority of Old Babylonian mathematical tablets, or part of a research project" (http://www.nyu.edu/isaw/exhibitions/before-pythagoras/items/plimpton-322/, accessed 11-23-2010).

Though the consensus may be that the tablet contains a listing of Pythagorean triples, Eleanor Robson pointed out that historical, cultural and linguistic evidence reveal that the tablet is more likely "a list of regular reciprocal pairs": Robson, "Words and Pictures. New Light on Plimpton 322," American Mathematical Monthly 109 (2001) 105-121.