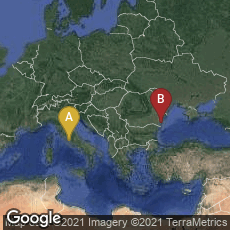 Computus, for Calculating the Date of Easter, is the Root of the Modern Word "Computer" Portrait of Dionysius Exiguus on an icon.

In 525 the Scythian monk Dionysius Exiguus, a computist, used a true zero in tables alongside Roman numerals, but he used the zero as a word, nulla (Latin) meaning nothing, not as a symbol. When division produced zero as a remainder, nihil (Latin) also meaning nothing, was used. These medieval zeros were used by all future computists (calculators of Easter).

"Computus (Latin for computation) is the calculation of the date of Easter in the Christian calendar. The name has been used for this procedure since the early Middle Ages, as it was one of the most important computations of the age."

♦ This is the root of the modern word "computer."

Dionysius was born in Scythia Minor (modern Dobruja shared by Romania and Bulgaria). He was a member of the Scythian monks community concentrated in Tomis, the major city of Scythia Minor. He is best known as the "inventor" of the Anno Domini (AD) era, which is used by certain people to number the years of both the Gregorian calendar and the (Christianized) Julian calendar.

From about the year 500 Dionysius lived in Rome, where, as a learned member of the Roman Curia, he translated from Greek into Latin 401 ecclesiastical canons, including the apostolical canons and the decrees of the councils of Nicaea, Constantinople,Chalcedon and Sardis, and also a collection of the decretals of the popes from Siricius to Anastasius II. These collections had great authority in the West. He also wrote a treatise on elementary mathematics.