Coin struck by Constantine I to commemorate the founding of Constantinople. 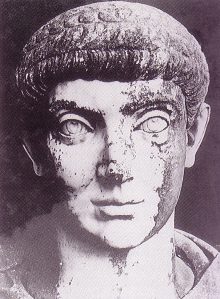 Between 324 and 330 the Emperor Constantine made the ancient Greek city Byzantium (Βυζάντιον, Byzántion; BYZANTIVM) his capitol, and renamed it Constantinople.

"Having restored the unity of the Empire, and, being in course of major governmental reforms as well as of sponsoring the consolidation of the Christian church, he was well aware that Rome was an unsatisfactory capital. Rome was too far from the frontiers, and hence from the armies and the Imperial courts, and it offered an undesirable playground for disaffected politicians. Yet it had been the capital of the state for over a thousand years, and it might have seemed unthinkable to suggest that the capital be moved to a different location. Nevertheless, he identified the site of Byzantium as the right place: a place where an emperor could sit, readily defended, with easy access to the Danube or the Euphrates frontiers, his court supplied from the rich gardens and sophisticated workshops of Roman Asia, his treasuries filled by the wealthiest provinces of the Empire.

"Constantinople was built over six years, and consecrated on 11 May 330. Constantine divided the expanded city, like Rome, into 14 regions, and ornamented it with public works worthy of an imperial metropolis. Yet, at first, Constantine's new Rome did not have all the dignities of old Rome. It possessed a proconsul, rather than an urban prefect. It had no praetors, tribunes, or quaestors. Although it did have senators, they held the title clarus, not clarissimus, like those of Rome. It also lacked the panoply of other administrative offices regulating the food supply, police, statues, temples, sewers, aqueducts, or other public works. The new programme of building was carried out in great haste: Columns, marbles, doors, and tiles were taken wholesale from the temples of the Empire and moved to the new city. In similar fashion, many of the greatest works of Greek and Roman art were soon to be seen in its squares and streets. The Emperor stimulated private building by promising householders gifts of land from the Imperial estates in Asiana and Pontica, and on 18 May 332 he announced that, as in Rome, free distributions of food would be made to the citizens. At the time the amount is said to have been 80,000 rations a day, doled out from 117 distribution points around the city" (Wikipedia article on Constantinople, accessed 07-12-2011).