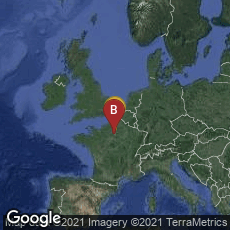 Page from the calendar of the Très Riches Heures showing the household of John, Duke of Berry exchanging New Year gifts in January. The Duke is seated at the right, in blue. 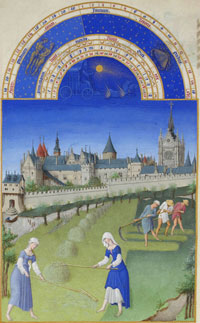 About 1413 to 1416 artists Herman, Paul, and Johan Limbourg, working for their patron, Jean, Duc de Berry created the paintings for the Très Riches Heures du Duc de Berry. It is a very richly decorated book of hours containing prayers to be said by the lay faithful at each of the canonical hours of the day.

This book, with its spectacular miniature paintings, has been called the most important illuminated manuscript of the late 15th century, and "le roi des manuscrits enluminés." It remained unfinished at the death of the Duc de Berry in 1416; the artists died the same year, leading to the suggestion that the deaths of artists and patron were caused by plague.

"The Très Riches Heures consists of 416 pages, including 131 with large miniatures and many more with border decorations or historiated initials, that are among the high points of International Gothic painting in spite of their small size. There are 300 decorated capital letters. The book was worked on, over a period of nearly a century, in three stages, led by the Limbourg brothers, Barthélemy van Eyck, and Jean Colombe....

"The writing, illuminated capitals, border decorations, and gilding was most likely executed by other specialists who remain mostly unknown. The Limbourg brothers left the book unfinished and unbound at their, and the Duke's, death in 1416. The work passed to the Duke's cousin, the royal art lover and amateur painter René d'Anjou, who had an unidentified artist, the so-called Master of the Shadows, who was probably Barthélemy van Eyck, work on the book in the 1440s. Forty years later Charles I, Duc de Savoie commissioned Jean Colombe to finish the paintings between 1485 and 1489.The paintings of Colombe are easy to distinguish, as are those of the Master of the Shadows (Barthélemy d'Eyck)" (Wikipedia article on the Tres Riches Heures du Duc de Berry, accessed 11-22-2008).

The manuscript is preserved in the Musée Condé, Chantilly, France. 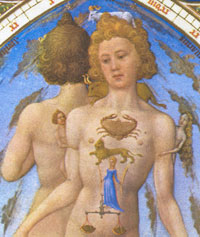 John of Valois, the Magnificent, "Jean, Duc de Berry", Duke of Berry and Auvergne and Count of Poitiers and Montpensier, has been called the greatest patron of illuminated manuscripts of his age. His library was probably the most artistically significant of all private libraries collected during the late Middle Ages. The third son of King John II of France and Bonne of Luxemburg; his brothers were Charles V, King of France, Louis I of Anjou, King of Naples and Philip the Bold, Duke of Burgundy.

Jean maintained numerous estates, including vast collections of art works of many kinds. He also died heavily in debt. Even though his library was much smaller in number than other collections it is far better preserved and accounted for since, for example, items with precious metal may have been melted down, and gemstones dispersed.

Numerous inventories of Jean's library were preserved, the earliest from 1402. Ironically perhaps, because of the many debts that Jean left at his death, aspects of his estate had to be liquidated, and the inventory of his books in the Chateau de Mehun prepared for Jean Bourne, "contrôleur de sa maison," was preserved, including appraised values of the 162 manuscripts, the greatest of which were recognized to be of immense monetary value at the time. This inventory, preserved at the Bibliothèque de Saint-Geneviève, Paris, was published completely for the first time by as La librairie de Jean, duc de Berry, au château de Mehun-sur-Yèvre, 1416, publiée en entier pour la première fois des notes by Hiver de Beauvoir (1860). 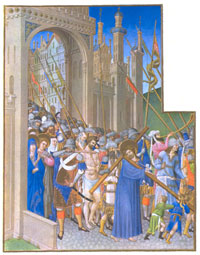 The most comprehensive study of Jean, Duc de Berry's library, which collated all extant inventories and listed a total of 297 manuscripts with their references in the manuscript inventories, was by Léopold Delisle. In this comprehensive study Delisle included an index by author and subject, and provided an inventory of extant manuscripts from the Duc de Berry library in French and foreign libraries. This was Recherches sur la librairie de Charles V. Partie II. Inventaire des livres ayant appartenu aux rois Charles V et Charles VI et à Jean, Duc de Berry (1907). The study of the library of Jean, Duc de Berry, appears on pp. 217-331.

Longnon & Cazelles, The Tres Riches Heures of Jean, Duc of Berry (1969) reproduces the manuscript in facsimile with an introduction that includes information concerning the history of the ownership of the manuscript before it was deposited in the Musée Conde by Henri d'Orleans, Duc d'Aumale in 1897.