Page 17r, the text page facing the image of Mark. 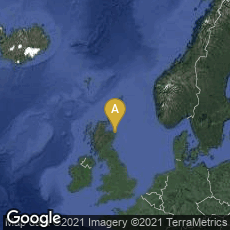 The Book of Deer, Possibly the Earliest Surviving Manuscript Produced in Scotland leaf 16v  of the digital facsimile of Cambridge MS Ii.6.32, the Book of Deer. 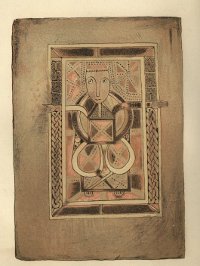 The Book of Deer  is a 10th century Gospel Book, written in Latin, Old Irish and Scottish Gaelic, from Old Deer, Aberdeenshire, Scotland. It contains the earliest surviving Gaelic literature from Scotland, and may be the oldest surviving manuscript produced in Scotland, with the possible exception of the Book of Kells. It is also notable for having originated in what is now considered a Lowland area.

"Each Gospel is prefaced by a full-page illumination (1v, 16v, 29v, 41v). The manuscript belongs to the category of 'Irish pocket Gospel Books', produced for private use rather than for church services. The association with Deer is deduced from additions in Gaelic or Middle Irish (3-5) including an account of the foundation of a monastery by Saint Columba and Saint Drostan and land grants to the house, and a Latin brieve of King David I in favour of the 'clerics of Deer' (40). One entry is dated 8 David I (1131-32). It is reasonable to assume that the manuscript was at Deer in Aberdeenshire when these additions were made" (http://cudl.lib.cam.ac.uk/view/MS-II-00006-00032/1, accessed 12-13-2012).

The Book of Deer is preserved in Cambridge University Library (MS Ii.6.32) In February 2014 a digital facsimile of it was available at this link.