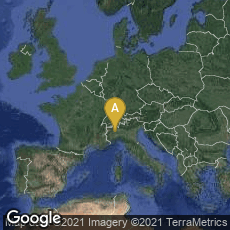 Preserved in the Museo del Tesoro del Duomo (Capitulary library and archives) of Vercelli, in the Province of Vercelli, Italy, the Codex Vercellensis Evangeliorum written on purple vellum is the earliest surviving manuscript of the old Latin Gospels ("Codex a"). The old Latin texts— also designed Vetus Latina, Vetus Itala, Old Italic— is the collective name given to Biblical texts in Latin that were translated before Jerome's Vulgate Bible became the standard for Latin-speaking Western Christians.

The Codex Vercellensis was written in the usual order of the Western Church— Matthew, John, Luke and Mark, but it no longer contains the last twelve verses of the Gospel of Mark. Tradition has it that it was written under the direction of bishop Eusebius of Vercelli. Because the codex was used for the taking of oaths in the early Middle Ages, much of it is either difficult to read or destroyed, so that a significant portion its text is known primarily from writing by later copyists or editors. It was restored and stabilized in the early twentieth century.