Astronomical diagram from the Almagest of Ptolemy (British Library Add MS 7474, f.11v). This codex was completed shortly after 28 Jumādá 1 686 (11 July 1287 CE) by an anonymous maghribī scribe. The codex contains Books One to Six of the Almagest, though to have been translated by al-Hajjāj ib Yūsuf ibn Matar (786-830), 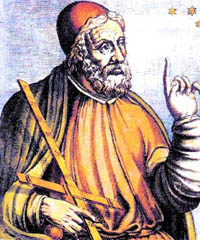 In the second century CE, probably at the Library of Alexandria, mathematician, astronomer, geographer, and astrologer Claudius Ptolemaeus (Greek: Κλαύδιος Πτολεμαίος , Klaúdios Ptolemaîos) wrote the Almagest, the Cosmographia, and the Tetrabiblos. In the Almgagest (in Greek, Η Μεγάλη Σύνταξις, "The Great Treatise", originally Μαθηματική Σύνταξις, "Mathematical Treatise") Ptolemy compiled the astronomical knowledge of the ancient Greek and Babylonian world, relying mainly on the work of Hipparchus, who had written three centuries earlier.

Ptolemy's Almagest is the only surviving comprehensive treatise on astronomy from antiquity. It was preserved, like most of classical Greek science, in Arabic manuscripts, hence its familiar Arabic name. The work was first translated into Latin from Arabic texts found in Toledo, in Al-Andalus, or Moorish Iberia, by Gerard of Cremona, in the 12th century, and it is from Gerard's version that the work became known to European scientists in the late Middle Ages and the Renaissance.

"Ptolemy formulated a geocentric model of the solar system which remained the generally accepted model in the Western and Arab worlds until it was superseded by the heliocentric solar system of Copernicus. Likewise his computational methods (supplemented in the 12th century with the Arabic computational Tables of Toledo), were of sufficient accuracy to satisfy the needs of astronomers, astrologers, and navigators, until the time of the great explorations. They were also adopted in the Arab world and in India. The Almagest also contains a star catalogue, which is probably an updated version of a catalogue created by Hipparchus. Its list of forty-eight constellations is ancestral to the modern system of constellations, but unlike the modern system they did not cover the whole sky (only the sky Ptolemy could see).”

Even though Ptolemy's Almagest remained the dominant textbook of theoretical astronomy from the second through the sixteenth centuries, only an epitome or digest appeared in print during the fifteenth century. This was the Epytoma in Almagestum Ptolemai published by the German mathematician, astronomer, astrologer, translator, instrument maker and Catholic bishop Johannes Müller von Königsberg, who is best known by the Latin version of his name, Regiomontanus.  The Epytoma, printed in Venice by Johannes Hamman for Kaspar Grossch and Stephan Roemer, and issued on August 31, 1496, must have been printed in an unusually large edition as it remains one of the most common of all books printed in the fifteenth century, with no less than 238 copies recorded in institutional libraries worldwide by the Incunabula Short Title Catalogue (ISTC No. ir00111000.) The first edition of Gerard of Cremona's translation of Ptolemy's complete text was published in Venice by Peter Liechtenstein on January 10, 1515. When I wrote this note only two American libraries had recorded their ownership of this edition in OCLC (Yale and the University of Michigan), and nine copies were cited in European libraries by the Karlsruhe Virtual Catalogue. Why so few copies of this edition were recorded remained unclear, but the most likely explanation was that the original printing was small. Gerard's text was reprinted many times.

Stillwell, The Awakening Interest in Science During the First Century of Printing 1450-1550, No. 97.

Ptolemy’s Cosmographia “is a compilation of what was known about the world’s geography in the Roman Empire during his time. He relied mainly on the work of an earlier geographer, Marinos of Tyre, and on gazetteers of the Roman and ancient Persian empire, but most of his sources beyond the perimeter of the Empire were unreliable.

“Ptolemy also devised and provided instructions on how to create maps both of the whole inhabited world (oikoumenè) and of the Roman provinces. . . . Ptolemy was well aware that he knew about only a quarter of the globe.”

The maps in surviving manuscripts of Ptolemy’s Cosmographia date only from about 1300, after the text was rediscovered by Maximus Planudes, a Byzantine scholar working in Constantinople. In 1475, when the text first appeared in print, it was published without maps. Two years later the first edition with maps was published in Bologna. The famous world map illustrated here was included in the edition published in Ulm, Germany by Lienhart Holle on July 16, 1482. (ISTC No. ip01084000).

"Ptolemy's treatise on astrology, known in Greek as the Apotelesmatika ("Astrological Outcomes" or "Effects") and in Latin as the Tetrabiblos ("Four books"), was the most popular astrological work of antiquity and also had great influence in the Islamic world and the medieval Latin West. The Tetrabiblos is an extensive and continually reprinted treatise on the ancient principles of horoscopic astrology in four books (Greek tetra means "four", biblos is "book"). That it did not quite attain the unrivaled status of the Almagest was perhaps because it did not cover some popular areas of the subject, particularly electional astrology (interpreting astrological charts for a particular moment to determine the outcome of a course of action to be initiated at that time), and medical astrology" (Wikipedia article on Ptolemy, accessed 07-16-2009).