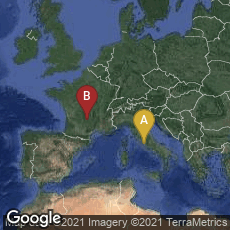 Gerbert d'Aurillac, the Mathematician Pope, Reintroduces the Abacus and Armillary Sphere to Europe Pope Sylvester II, in blue, as depicted in the Gospels of Otto III, Illuminated by Meister der Reichenauer Schule, from 998-1001. Assuming that the identification of Sylvester in this manuscript is accurate, this portrait miniature would have been done during Sylvester's lifetime.

Gerbert d'Aurillac was a scholar, teacher, tutor and counsellor to Otto III before being elevated to the papacy as Sylvester II (or Silvester II) from 999 till his death in 1002. He was influential in introducing Arabic knowledge of arithmetic, mathematics, and astronomy to Europe, reintroducing the abacus and armillary sphere which had been lost to Europe since the end of the Greco-Roman era.

"According to William of Malmesbury (c.1080 – c.1143), Gerbert stole the idea of the computing device of the abacus from a Spanish Arab. The abacus that Gerbert reintroduced into Europe had its length divided into 27 parts with 9 number symbols (this would exclude zero, which was represented by an empty column) and 1,000 characters in all, crafted out of animal horn by a shieldmaker of Rheims. According to his pupil Richer, Gerbert could perform speedy calculations with his abacus that were extremely difficult for people in his day to think through in using only Roman numerals. Due to Gerbert's reintroduction, the abacus became widely used in Europe once again during the 11th century" (Wikipedia article on Pope Sylvester II, accessed 11-24-2008).