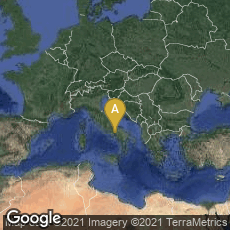 The Codex Beneventanus, From the Libraries of Richard Mead and Anthony Askew 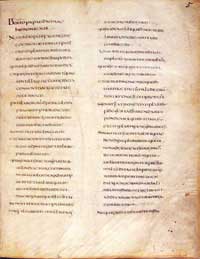 According to a subscription on folio 239 verso, the Codex Beneventanus (British Library Add. MS 5463), an illuminated Gospel Book, was written by a monk named Lupus for one Ato. This was probably Ato, abbot from 736-760 of the monastery of St. Vincent on the Volturno, near Benevento, Italy.

"The codex contains the Vulgate version of the four Gospels, the canon tables of Eusebius of Caesarea, the letter of St. Jerome to Pope Damasus (Novum opus), the prologue of St. Jerome to the Gospels (Plures fuisse), and prologues and chapter lists for each of the Gospels. The text is written on vellum in two columns in Uncial script with no division between words. The running titles are in small uncials while the incipits and explicits are in capitals. The incipits and explicits are written in alternating lines of red and black ink. The subscription of Lupus is written in uncials, and also has alternating lines of red and black ink. The text contains additional punctuation and annotations in a 10th century Beneventuan hand."

"By the 13th century it [the manuscript] was associated with St. Peter's convent in Benevento. In the first half of the 18th century it was owned by Dr. Richard Mead, and was used by Dr. Richard Bentley in his collation of New Testament texts. Dr. Mead may have acquired the manuscript in the 1690s when he traveled to Italy, however, the manuscript did not appear in the catalog of the sale of his library in 1754-55. The manuscript was later owned by Anthony Askew (d. 1754). It was purchased by John Jackson in 1785 at the sale of Askew's manuscripts. The British Library purchased it in 1794 at the sale of Jackson's manuscripts" (Wikipedia article on Codex Beneventanus, accessed 06-15-2009).