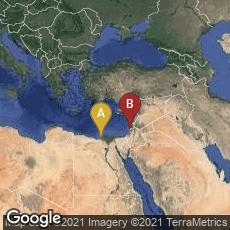 Eusebius Establishes the Eusebian Sections, One of the Earliest, Most Widely-Used Cross-Indexing Systems 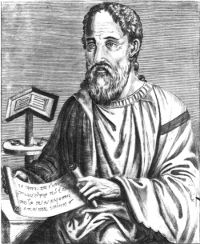 The Eusebian canons or Eusebian sections, also known as Ammonian Sections, are the system of dividing the four Gospels used between late Antiquity and the Middle Ages. They are usually attributed to the Roman historian, exegete, and Christian polemicist and Bishop Eusebius of Caesarea who was active between 280 and 340. The sections are indicated in the margin of nearly all Greek and Latin manuscripts of the Bible, and usually summarized in Canon Tables at the start of the Gospels . There are about 1165 sections: 355 for Matthew, 235 for Mark, 343 for Luke, and 232 for John; the numbers, however, vary slightly in different manuscripts. These tables represent a way for the reader to move back and forth between related sections in the texts, and are an early organizational structure and cross-indexing system.

"Until the nineteenth century it was mostly believed that these divisions were devised by Ammonius of Alexandria, at the beginning of the third century (c. 220), in connection with a Harmony of the Gospels, now lost, which he composed. It was traditionally believed that he divided the four Gospels into small numbered sections, which were similar in content where the narratives are parallel. He then wrote the sections of the three last Gospels, or simply the section numbers with the name of the respective evangelist, in parallel columns opposite the corresponding sections of the Gospel of Matthew, which he had chosen as the basis of his Harmony. Now it is believed that the work of Ammonius was restricted to what Eusebius of Caesarea (265-340) states concerning it in his letter to Carpianus, namely, that he placed the parallel passages of the last three Gospels alongside the text of Matthew, and the sections traditionally credited to Ammonius are now ascribed to Eusebius, who was always credited with the final form of the tables.

"The tables themselves were usually placed at the start of a Gospel Book, and in illuminated copies were placed in round-headed arcade-like frames of which the general form remained remarkably consistent through to the Romanesque period. This form was derived from Late Antique book-painting frames like those in the Chronography of 354. In many examples the tables are the only decoration in the whole book, perhaps other than some initials. In particular, canon tables, with Evangelist portraits, are very important for the study of the development of manuscript painting in the earliest part of the Early Medieval period, where very few manuscripts survive, and even the most decorated of those have fewer pages illuminated than was the case later" (Wikipedia article on Eusebian Canons, accessed 11-26-2008).