World map, by Cosmas Indicopleustes. The map is oriented with north at the top. 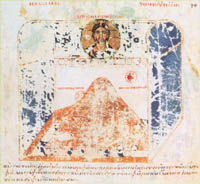 Around 550 Cosmas Indicopleustes (literally: "who sailed to India") wrote the copiously illustrated Topographia Christiana or Christian Topography, a work partly based on his personal experiences as a merchant on the Red Sea and Indian Ocean in the early 6th century. It is thought that the author served as a monk on Mt. Sinai after spending a career at sea. The earliest and best manuscript of this work, dating from the ninth century, and containing an early flat earth world map, is preserved in the Vatican Library.

"A major feature of his Topography is Cosmas' worldview that the world is flat, and that the heavens form the shape of a box with a curved lid, a view he took from unconventional interpretations of Christian scripture. Cosmas aimed to prove that pre-Christian geographers had been wrong in asserting that the earth was spherical and that it was in fact modelled on the tabernacle, the house of worship described to Moses by God during the Jewish Exodus from Egypt" (Wikipedia article on Early World Maps, accessed 11-26-2008).