Folio 2 recto from the Quedlinburg Itala fragment; scenes from Chapter 15 of 1 Samuel . 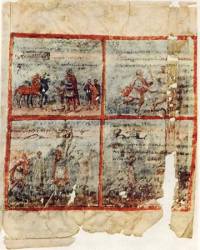 The Quedlinburg Itala fragment (Berlin, Staatsbibliothek Preussischer Kulturbesitz, Cod. theol. lat. fol. 485) consists of six folios from a large  illuminated manuscript of an Old Latin translation of the Bible. It is the oldest surviving illustrated biblical manuscript, and according to Bernhard Bischoff, it may date from the end of the fourth century. If so, it was probably created in Rome.

"The fragments were found in the bindings of books in the town of Quedlinburg. The illustrations are grouped in framed miniatures occuping an entire page. There are between two and five miniatures per page, with the corresponding text being on separate pages. The illustrations, although much damaged, are done in the illusionistic style of late antiquity. . . .

"Much of the paint surface is lost revealing the underlying writing that gives instructions to the artist who should execute the pictures. Translation of the text: "You make the tomb [by which] Saul and his servant stand and two men, jumping over pits, speak to him and [announce that the asses have been found]. You make Saul by a tree and [his] servant [and three men who talk] to him, one carrying three goats, one [three loaves of bread, one] a wine-skin." (Wikipedia article on Quedlinburg Itala fragment, accessed 11-29-2008).

The fragment is preserved at the Staatsbibliothek Preussischer Kulturbesitz, Berlin.

Bischoff, Manuscripts and Libraries in the Age of Charlemagne (2008) 5.