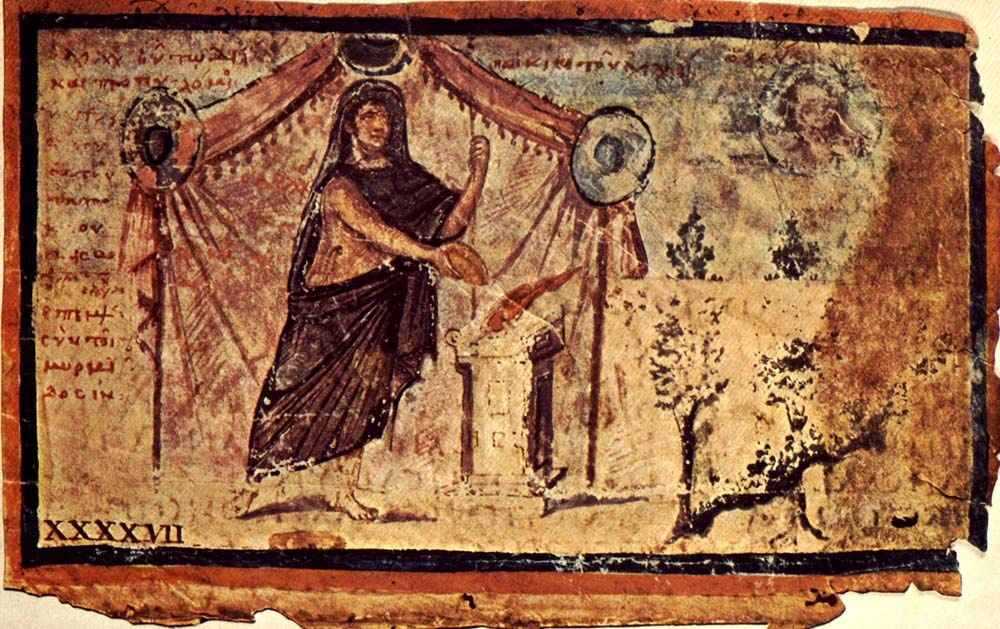 Fifty-eight miniatures cut out of a 5th century illuminated manuscript on vellum of the Iliad of Homer are known as the Ilias Ambrosiana (Ilia picta). The manuscript is thought to have been produced in Constantinople during the late 5th or early 6th century, specifically between 493 and 508. "This time frame was developed by Ranuccio Bandinelli and is based on the abundance of green in the pictures, which happened to be the color of the faction in power at the time" (Wikipedia article on Ambrosian Iliad, accessed 11-30-2008).

"show a considerable diversity of compositional schemes, from single combat to complex battle scenes. This indicates that, by that time, Iliad illustration had passed through various stages of development and thus had a long history behind it. It seems mere chance that neither an illustrated Odyssey nor any of the other Greek epic poems has survived" (Weitzmann,  Late Antique and Early Christian Book Illumination [1977] 13).

Before it was preserved in the Biblioteca Ambrosiana, Milan, the Ilias Ambrosiana fragment was in the library of humanist, botanist, and collector, Gian Vincenzo Pinelli, whose library of hundreds of manuscripts and roughly 8500 printed works was probably the greatest in 16th century Italy.

Nuovo, "The Creation and Dispersal of the Library of Gian Vincenzo Pinelli", Mandelbrote et al (eds) Books on the Move: Tracking Copies Through Collections and the Book Trade (2007) 39-68.