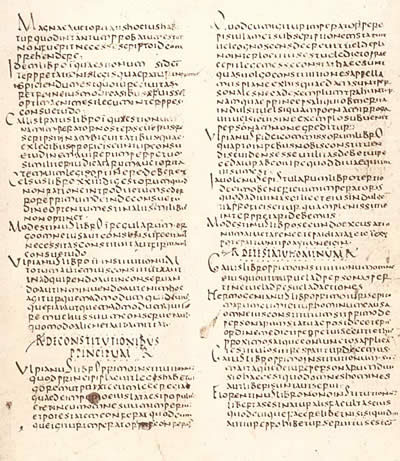 The codex called the Littera Florentina or Pandectarum codex Florentinus was written between 533 and 555 CE. It is the closest survivor to an official version of the Digesta or Pandectae portion of the Corpus Juris Civilis, the digest of Roman law promulgated by Justinian I for the first time in 529, of which no copies survived. What survived was the revised edition of 533-34. Since 1406 the codex has been preserved in the Biblioteca Medicea Laurenziana, Florence.

"The codex, of 907 leaves, is written in the Byzantine-Ravenna uncials characteristic of Constantinople, but which has recently been recognized in legal and literary texts produced in Alexandria and the Levant. Close scrutiny dates the manuscript between the official issuance in 533 and 557, making it an all-but contemporary and all-but official source.

"Marginal notes suggest that the codex was in Amalfi—part of the Byzantine territory in Italy governed by the Exarchate of Ravenna in the 6th century— and that it passed to Pisa in the 12th century; the codex was part of the war booty removed from Pisa to Florence after the war of 1406. The manuscript became one of Florence's most treasured possessions. It was only shown to very important persons. Scholarly access was difficult. It took more than three centuries before a reliable edition of the Littera Florentina was finally made available."

"The importance of the manuscript lies in the fact that is an almost unique witness of the original Justinian Digest. Most medieval manuscripts of the Digest have a substantially different text. Its sudden reappearance in the late eleventh or early twelfth century has been much debated by legal historians" (Wikipedia article on Littera Florentina, accessed 12-05-2008).

"A compilation of pre-classical and classical Roman law (written before 245 c.e.), the work was culled from some three thousand books of the Roman jurisconsults and comprises 800,000 words. It is important to note that many of these quotations had been altered during the nearly three centuries of their transmission from the end of the classical period in the middle of the third century. The sources of the Babylonian Talmud, transmitted orally, were also subject to changes in wording, context, and, occasionally, substance.

"The Digest was the major constituent of Justinian’s Code, which we have only in its second edition, completed in 534 by the Roman Jurist, Tribonian. Tribonian headed a committee of sixteen Byzantine law professors, and accomplished this daunting task in just three years. In addition, the Code contained the Institutes, a first-year textbook for law students who would enter the emperor’s bureaucracy trained in his version of Roman law, and the Fifty Decisions, which was supposed to adjudicate all outstanding differences of opinion. The entire work thus runs to about one million words, and is restricted to civil, or private, law" (Yaakov Ulman, "The Babylonian Talmud in its Historical Context," Printing the Talmud: From Bomberg to Schottenstein, 19, accessed 12-05-2108).