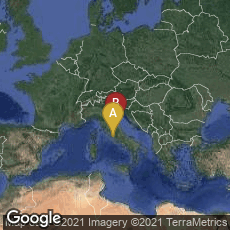 Table of reciprocal alphabet from a 1555 book by Giovan Battista Bellaso.

In 1553 Italian cryptologist Giovan Battista Bellaso published La Cifra del Sig. Giovan Battista Bel[l]aso, describing a text autokey cipher that was considered unbreakable for four centuries. "He suggested identifying the alphabets by means of an agreed-upon countersign or keyword off-line. He also taught various ways of mixing the cipher alphabets in order to free the correspondents from the need to exchange disks or prescribed tables.

"In 1550 Bellaso "was in the service of Cardinal Duranti in Camerino and had to use secret correspondence in the state affairs while his master was in Rome for a conclave. Versed in research, able in mathematics, Bellaso dealt with secret writing at a time when this art enjoyed great admiration in all the Italian courts, mainly in the Roman Curia. In this golden period of the history of cryptography, he was just one of many secretaries who, out of intellectual passion or for real necessity, experimented with new systems during their daily activities. His cipher marked an epoch and was considered unbreakable for four centuries. As a student of ciphers, he mentioned among his enthusiasts many eminent gentlemen and ‘‘great princes’’. In 1552, he met count Paolo Avogadro, count Gianfrancesco Gambara, and the renowned writer Girolamo Ruscelli, also an expert in secret writing, who urged him to reprint a reciprocal table that he was circulating in loose-leaf form, in print and manuscript. The table was to be duly completed with the instructions. Copies of these tables exist in contemporary private collections in Florence and Rome" (Wikipedia article on Giovan Battista Belaso, accessed 12-22-2008).