A painting of Saint Jerome by Bartolomeo Cavarozzi in the early 17th century entitled St. Jerome Visited by Angels. Portrait of Pope Sixtus IV by Justus van Gent and Pedro Berruguete circa 1473-1475 in the Louvre. 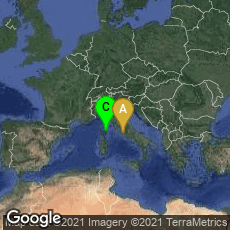 Printing Decreased the Costs of Books by 80% In 1468 humanist Giovanni Andrea Bussi (Joannes Andreae de Bussis), bishop of Aléria, and the chief editor for the printing house of Conrad Sweynheym and Arnold Pannartz after it moved from Subiaco to Rome, wrote to Pope Paul II:

"In our time God gave Christendom a gift which enables even the pauper to acquire books. Prices of books have decreased by eighty percent" (Hirsch, Printing, Selling and Reading 1450-1550 [1967] 1).

Hirsch mentions in a footnote that this statement was printed by Sweynheym and Pannartz in their edition of St. Jerome, Epistolae, Rome, 1468, but does not mention that Bussi edited that edition.

"Bussi also produced for Sweynheym and Parnnatz editions of the Epistolae of Jerome (1468), the Historia naturalis of Pliny the Elder (1470), the complete works of Cyprian (1471), and the works of Aulus Gellius. Though his edition of Pliny [ISTC no. ip00787000] was not the first (a 1469 printing at Venice preceded it), nonetheless it was criticised by Niccolò Perotti in a letter to Francesco Guarneri, secretary of cardinal-nephew Marco Barbo. Perotti attacks Bussi's practice, then common, of adding one's own preface to an ancient text, and also the quality and accuracy of his editing" (Wikipedia article on Giovanni Andrea Bussi, accessed 01-04-2009).

Bussi dedicated most of his editions to Pope Paul II, whom he served as the first papal librarian. That a bishop and papal librarian served as chief editor for printers suggests a both a recognition of the importance of printing by the church and a close relationship between the printers and the Vatican.