Byzantine repousse silver bookbinding cover depicting St. Peter, holding a cross and gesturing as if preaching. At his waste are the keys to the kingdom of heaven given to him by Christ (Matthew 16;19). "The arch flanked by peacocks under which Peter stands is considered a representation of paradise in early Christian art. 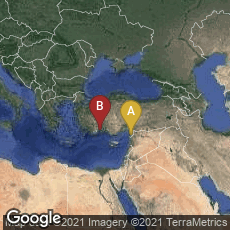 A: Hatay, Turkey, B: Antalya, Turkey 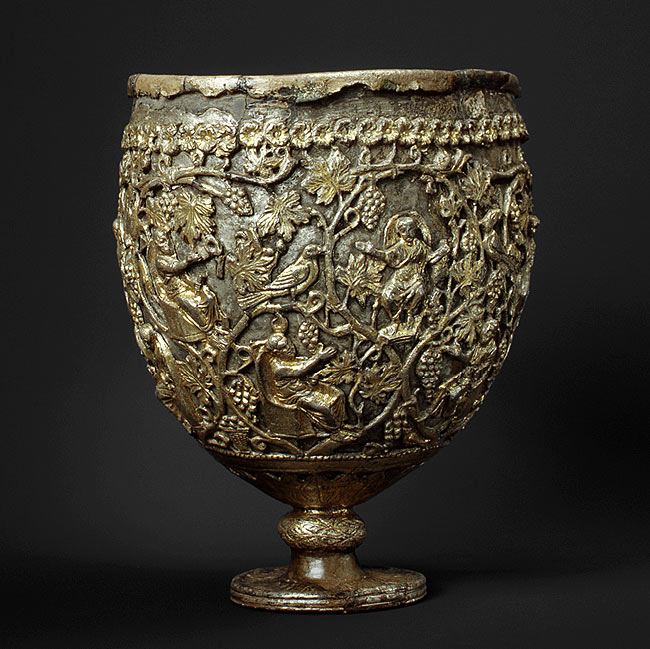 "The first surviving metal bookcovers originated in the Eastern Empire. Four pairs of repoussé silver covers are known, all dated to the second half of the sixth century. Two of the pairs were apparently found in [Antioch?], Syria, together with the famous Antioch chalice, and two were found near Antalya, in southern Turkey. In all cases, the front and back covers are virtually identical. Three pairs depict standing figures of Christ or saints, two representing the figures within arched porticoes, the third showing two saints flanking a large cross. The fourth pair represents a large cross between two trees, again within an arched portico. The earliest western metal work bookcovers (though their origin has been disputed) are the pair presented by the Lombard queen, Theodelinda (d. 625) to the Basilica of St. John the Baptist in Monza. The covers again are identical, each bearing a gem-encrusted cross over a gold background surrounded by a frame of red glass cloisonné" (Needham, Twelve Centuries of Bookbindings 400-1600 [1979] 22).

The pair of metal bookcovers found with the Antioch chalice are preserved, along with the chalice, in the Metropolitan Museum of Art. They are described and illustrated in Minor (ed.) The History of Bookbinding 525-1950 AD (1957) nos. 3 & 4, plate II.