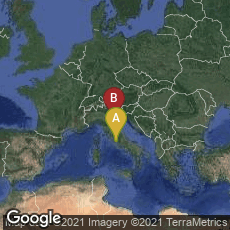 Marco Fabio Calvo Revives Hippocrates as the Precursor of Galen Calvo's autograph manuscript of his translation of the writings of Hippocrates into Latin, completed 1515. Vatican Library. 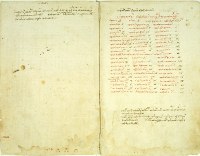 "This volume, which preceded the first, Aldine, edition of the Greek text by a year, 'changed what was known of Hippocrates almost beyond recognition.' In the sixteenth century the influence of Galen remained greater than that of Hippocrates, and many aspects of Renaissance Hippocratism remained to be investigated. Nonetheless, it is clear that the name of Hippocrates was invoked by physicians seeking an alternative to aspects of academic Galenism—so that an appeal to an authority even more venerable than Galen on occasion served to justify criticism of current beliefs and practices, if not innovation. Moreover medieval Hippocratic spuria began to be weeded out and the Epidemics are likely to have had some influence upon descriptions of patients and diseases.

"Fabio Calvo's original plan was apparently to publish a printed edition both of the Greek text and of his own Latin translation of the Hippocratic corpus, although as it turned out, only the translation was printed. A scholar of ascetic and frugal character—of which his vegetarianism was considered especially impressive evidence—he embarked on his work on Hippocrates when he was already an old man. As a friend of Raphael, for whom he translated Vitruvius into Italian, and an enthusiast for Roman antiquities, he also undertook the production of an illustrated volume on the urban geography of ancient Rome. Fabio Calvo finished collating and writing out his own copy of the Greek text of the Hippocratic corpus in 1512. His main source was fourteenth-century manuscript—then believed to be of considerably greater antiquity—in his own possession. But he also consulted one of the oldest and most important Hippocratic manuscripts, a twelfth-century codex that has been among the papal books since Charles of Anjou gave it to Clement IV in 1266" (Nancy G. Siraisi, "Life Sciences and Medicine in the Renaissance World," Grafton (ed) Rome Reborn. The Vatican Library and Renaissance Culture [1993] 181-83).

What is called the "Hippocratic collection" is a conglomeration of works traditionally attributed to the medical school of the Greek Island of Cos, but now thought to include writings that may have come also from Cnidus, and perhaps also from Italy. The majority of these works date from the last decades of the fifth and the first half of the fourth centuries BCE. Among the Hippocratic collection are five writings that may be characterized as anatomical: (one page), On the Heart, On the Nature of Bones, On Flesh, and On Glands. These are among the earliest anatomical writings preserved from ancient Greece. However, no Greek physician before Herophilus of Alexandria practiced human dissection in a systematic way. The remainder of the Hippocratic collection falls under the folowing general categories: Theoretical Writings, Clinical Medicine, Surgery, Obstetrics and Gynecology, Deontology (including the Hippocratic Oath). Although none of the seventy-odd works in this collection can be attributed with certainty to Hippocrates, the writings retain their historical significance as the earliest extant sources of Western medical thought and practice. The school, or schools, identified with Hippocrates established an empirical system of medicine based upon observation and clinical experience, advancing medicine beyond the influences of magic and priestcraft.

Book History from 1452 to 1797
Survival of Information / Philology
Medicine