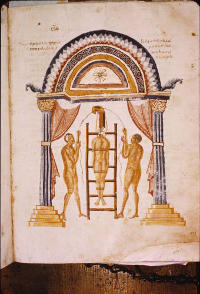 The earliest surviving illustrated surgical codex was written and illuminated in Constantinople for the Byzantine physician Niketas (Nicetas) about 900 CE. It contains 30 full-page images illustrating the commentary of Apollonios of Kition on the Hippocratic treatise On Dislocations (Peri Arthron) and 63 smaller images scattered through the pages of the treatise on bandaging of Soranos of Ephesos. The Apollonian paintings represent various manipulations and apparatus employed in reducing dislocations; each of the images is framed in the Byzantine style in an archway of ornate design.

According to Karl Sudhoff, Beiträge zur Geschichte der Chirurgie im Mittelalter (1914) 4-7 the origins of these drawings go back to Alexandria or Cyprus where Apollonius wrote his commentary between 81 and 58 BCE, under the patronage of the king Ptolemaius (Ptolemy of Cyprus).

"They were undoubtedly transmitted directly from antiquity, and, therefore, represent the genuine Hippocratic traditions of surgical practice as transmitted through later Greek channels to Byzantium" (Garrison, Introduction to the History of Medicine 2d ed [1917] 108).

According to Vivian Nutton's article on the codex in Grafton et al eds., The Classical Tradition (2010) 638, the Nicetas codex "was included in the library of the Orphanage of Alexius Comnenus, and later in that of the Hospital of the Forty Martyrs." In 1492 or 1495 Greek scholar Janus Laskaris purchased the Nicetas Codex in Crete for Lorenzo de' Medici. By 1530 it belonged to Guilio de' Medici, Pope Clement VII, "who loaned it back to Lascaris for a proposed and never completed edition of the medical and surgical texts it contained. From a copy made by Lascaris, now in Paris in the Bibliothèque Nationale, Ferdinando Balami produced the first Latin translation of Galen's On Bones (1535). This copy, illuminated by Santorinos of Rhodes, entered the library of Cardinal Ridolfi, who arranged for yet a third copy to be prepared by Christoph Auer and sent as a present to Francis I in 1542. This volume, now also in the Bibliothèque Nationale, was taken to Paris by a young Florentine doctor Guido Guidi, who had prepared a Latin translation of the surgical texts" (Nutton, op. cit.) The original Nicetas codex was later acquired by Cardinal Nicolas Rudolfi, and is preserved in the Laurentian Library (Biblioteca Laurenziana, Plut. 74.7 [Codex Niketas]).