Sculpture of Edward I (Longshanks) 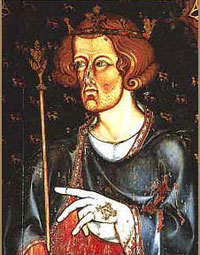 In 1275 Edward I of England (Longshanks) promulgated the Statute of the Jewry.

"Since the time of the Norman Conquest, Jews had been filling a small but vital role in the English economy. Usury by Christians was banned by the church at the time, but Jews were permitted to act as moneylenders and bankers. That position enabled some Jews to amass tremendous wealth, but also earned them the enmity of the English populace, which added to the increasing antisemitic sentiments of the time, due to widespread indebtedness and financial ruin among the Gentile population.

"When Edward returned from the Crusades in 1274, two years after his accession as King of England, he found that land had become a commodity, and that many of his subjects had become dispossessed and w ere in danger of destitution. Jews traded land for money, and land was often mortgaged to Jewish moneylenders.

"As special direct subjects of the monarch, Jews could be taxed indiscriminately by the King. Some have described the situation as indirect usury: the monarch permitting and encouraging Jews to practice usury and then 'taxing' or expropriating some of the profit. In the years leading up to the Statute, Edward taxed them heavily to help finance his forthcoming military campaigns in Wales, which commenced in 1277. One theory holds that he had exhausted the financial resources of the Jewish community when the Statute was passed in 1275.

* Usury was outlawed in every form.

* Creditors of Jews were no longer liable for certain debts.

* Jews were not allowed to live outside certain cities and towns.

* Any Jew above the age of seven had to wear a yellow badge of felt on his or her outer clothing, six inches by three inches.

* All Jews from the age of 12 on had to pay a special tax of three pence annually.

* Christians were forbidden to live among Jews.

* Jews were licensed to buy farmland to make their living for the next 15 years.

* Jews could thenceforth make a living in England only as merchants, farmers, craftsmen or soldiers.

"The license to buy land was included so that farming, along with trading, could give Jews an opportunity to earn a living with the abolition of usury. Unfortunately, other provisions along with widespread prejudice made this difficult for many. When the 15 years passed, and it was widely discovered that their practice of usury had been secretly continued, Jews were finally presented with the Edict of Expulsion of 1290" (Wikipedia article on Statute of the Jewry, accessed 02-13-2009).