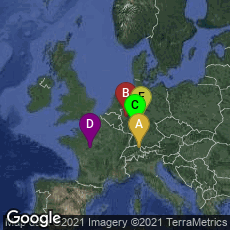 We Have Few Inventories of Ninth Century or Earlier Libraries Image Source: en.wikipedia.org
Whimsical hot air balloon in the shape of the Cathedral of St. Gall. I selected this image to accompany this database entry, seizing the opportunity, for once, to include an image that was not entirely serious.

"The evidence for the arrangement and contents of libraries in and before the ninth century is sparse. In the earliest times the numbers to be stored were small. As there was no pressing problem of storage or access, the need for elaborate finding aids did not arise. Between 300 and 400 manuscripts—most with two or more works within them—was a good-sized collection for a Carolingian monastery: St. Gall owned 395 codices in 835 and the Cologne cathedral had 108 in 833. From the most prolific scriptorium of the age, that of Tours, 350 manuscripts still survive. The oldest library catalogs, such as that of Fulda in the mid-eighth century, are no more than lists of titles, often imperfect and for the most part simple inventories of the books as they stood on the shelf. The order of the lists reflects the usual subject arrangement: Bibles first, followed by glosses, liturgies, patristic works, philosophy, law, grammar, sometimes with historical and medical works at the end, and classical works scattered among the relevant headings. The Lorsch catalogs of the earlier part of the ninth century are a good deal lengthier and more detailed, with 590 titles arranged in 63 classes. Since monasteries were places of education as well as worship, many of the classical texts and nearly all the grammatical works would have been used as school texts. Books were usually stored in cupboards, either in the church or in the cloister closest adjoining it, sometimes in the refectory (for communal reading) as well. The separate library room was, in general, a later development, but in an early ninth-century plan believed to be an idealized scheme of a monastery with a bibliotheca and scriptorium attached to the church, survives in St. Gall" (M. Davies, "Medieval Libraries" in D. Stam (ed.) The International Dictionary of Library Histories I [2001] 106).