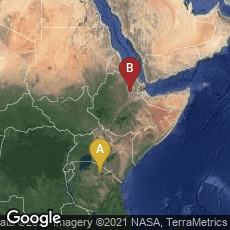 "The earliest archaeological deposit, known as Bed I, has produced evidence of campsites and living floors along with stone tools made of flakes from local basalt and quartz. Since this is the site where these kinds of tools were first discovered, these tools are called Oldowan. It is now thought that the Oldowan toolmaking tradition started about 2.6 million years ago. Bones from this layer are not of modern humans but primitive hominid forms of Paranthropus boisei and the first discovered specimens of Homo habilis" (Wikipedia article on Olduvai Gorge, accessed 04-04-2009).

"Oldowan tool use is estimated to have begun about 2.5 million years ago (mya), lasting to as late as 0.5 mya. For about 1 million years exclusively Oldowan sites are found. After 1.5 mya Acheulean sites make their appearance in the archaeological record, but this does not mean Oldowan sites are no longer found. It is thought that Oldowan tools were produced by several species of hominins ranging from Australopithecus to early Homo. 'Oldowan' therefore does not properly refer to a culture, but to a very simple tradition of tool manufacture that was in use for a long time" (Wikipedia article on Oldowan, accessed 04-04-2009).

Primitive shaped stone tool artifacts closely resembling Olduwan technology were found with Australopithecus garhi remains dating back roughly 2.5 and 2.6 million years, discovered in the Bouri Formation, an area in the Middle Awash Valley, Ethiopia in 1996 by a research team led by Ethiopian paleontologist Berhane Asfaw and American paleontologist Tim White. Those hominin remains are believed to be a human ancestor species, and the final missing link between the Australopithecus genus and the human genus, Homo. The tools associated with A. garhi may be older than those made by Homo habilis, which is thought to be a possible direct ancestor of more modern hominins.

For a long time anthropologists assumed that only members of early genus Homo had the ability to produce sophisticated tools, and the crude ancient tools associated with Austropithecus garhi apparently lack several techniques that are generally seen in later forms, Olduwan and Acheulean. About 3,000 stone artifacts found in another site in Bouri, Ethiopia, were estimated to be 2.5 million years old.