Title page of the first edition of Pedro Cieza de Léon's history in which he first mentioned the quipu without understanding how the system worked. 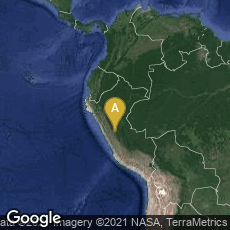 An illustration of quipu from Locke's paper.

In 1912 anthropologist Leslie Leland Locke published "The Ancient Quipu, A Peruvian Knot Record," American Anthropologist, New Series I4 (1912) 325-332. This was the first work to show how the Inca (Inka) Empire and its predecessor societies used the quipu (Khipu) for mathematical and accounting records in the decimal system. Locke stated his conclusions as follows:

"1. These knots were used purely for numerical purposes.

"2. Distances from the main cord were used roughly to locate the orders, which were on a decimal scale.

"3. The quipu was not used for counting or calculating but for record keeping. The mode of tying the knots was not adapted to counting, and there was no need of its use for such a purpose, as the Quichua language contained a complete and adequate system of numeration.

"4. Other specimens examined contain the same types of knots there being but ten variations in all, two forms for the single knot and eight long knots. These eight differ from each other and from the single knot only in the number of turns taken in tying. There is nothing about any specimen examined to give the slightest suggesion that it was used for any other than numerical purposes.

"5. If the hypothesis that this quipu is a record of the same classes of objects be correct, it would seem to indicate the colors in this case have no special significance, but were taken according to the fancy or convenience of the maker. This does not signify that there was not a rough color scheme in sue for some purposes.

"6. These specimens confirm in a remarkable way the accuracy with which [the Inca] Garcilasso [de la Vega] described the manners and customs of his people."

In 1923 Locke published an expanded version of his research in a monograph entitled The Ancient Quipu or Peruvian Knot Record.

According to "The "Storage Engine" website of the Computer History Museum, the quipu numerical record keeping system was in use by the Tiwanaku people, precursors of the Incas, perhaps as early as 1500 BCE:

"The Tiwanaku people lived in the Andes Mountains of South America around Lake Titicaca in today’s Bolivia from circa 1500 BCE until circa 1200 CE. Evidence suggests a sophisticated culture adept at astronomical timekeeping, architecture, agriculture, and social order. Shards of Tiwanaku pottery dated to around 400 CE bear artwork depicting a tribal elder or shaman with his arm extended horizontally. A series of knotted strings that today is known as a quipu dangles from the arm. Predating the Tiwanaku society, archeologists discovered the oldest known quipu made about 4,600 years ago at Caral on the Peruvian coast.

"The Inca civilization that emerged in the region in the 13th century adopted the quipu to record and transmit tax records, census data and other information across the great distances of the Inca Empire. “Quipu” means “knot” in the Peruvian Quechua language. Europeans learned of the quipu when Spanish colonizers arrived in the Inca capital of Cuzco in 1532. Suspicious of the purpose of these assemblies of knotted, colored cotton and wool cords, the conquistadors destroyed most of them. Less than 300 remain."

The first Spanish historian of Peruvian culture, conquistador Pedro Cieza de Léon, wrote in Parte Primera dela Crónica del Perú (1553) that “Each ruler of a province was provided with accountants, and by these knots they kept account of what tribute was to be paid … and with such accuracy that not so much as pair of sandals was missing.” However, the exact way that quipu were used was not understood until Locke's work in the 20th century.

Research on this topic was further advanced by mathematician Marcia Ascher and anthropologist Robert Ascher in Code of the Quipu. A Study of Media, Mathematics, and Culture (1981).