1903 Advertisement for the four models of the Curved Dash Oldsmobile, the first high-volume, low-priced American motor vehicle. The curved dashboard is prominent at the front of each of the models. 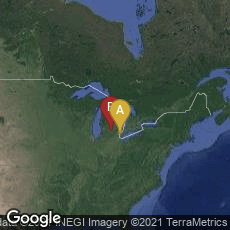 In 1901 Olds designed and introduced the Curved Dash Oldsmobile. Selling for $650, this was the first high-volume, mass-produced, low-priced American motor vehicle, produced on the first assembly line, a development of immense consequence, which Olds patented. Although the factory was destroyed by fire that year, the company still sold over 600 models of the Curved Dash. The assembly line approach to building automobiles enabled Olds to more than quintuple his factory’s output, from 425 cars in 1901 to 2,500 in 1902, to up to 5000 units in 1904.